Sipping A Sling In Singapore 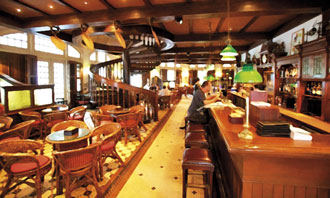 As I drew a slow sip of pineapple juice infused with gin and syrupy liquors through the slender straw, my taste buds quivered at the intense sweetness. But, perhaps it wasn’t the sugary, pink concoction that sent shivers into my center. Maybe, it was knowing that Rudyard Kipling could have lingered on this very barstool. Maybe, Somerset Maugham had pondered plots for his novels over a whiskey, here at the bar. Maybe, Alfred Hitchcock, puffing on a Cuban, imagined this setting of intrigue and grandeur at the Raffles Hotel Singapore as the ideal location for his next film. All these luminaries and others had graced this spot and now I joined the list, but without the celebrity fanfare, yet.

I have read that this experience is considered ‘one of the truest rites of passage of travel.’ I have also read that some visitors call it a tourist trap, ‘a place for parting people from huge sums of money with little value in return.’ What site, what monument, what natural wonder of the world that commands historical significance is not a tourist trap, I thought. Would a traveler bypass Machu Picchu, the Taj Mahal, or Havana’s Floridita, where Ernest Hemingway threw back Daquiris, just because hordes wanted to see it, feel it or taste it? I suppressed the blatant realities: that my cocktail had been premixed, that this famed, second-floor bar had been relocated from its original street-level venue, that the price for one 8 oz. drink measured $36S (Singapore Dollars)- about $28 US. Instead, I closed my eyes and let visions of the past surface.

Exotic tales seeped from the mahogany lined walls and rose up from the tiled floors. One of the few remaining 19th century guest lodges in the world, the Raffles Hotel Singapore, inspired by Malayan plantation life of the late 1800s, still stands as a grand dame, dwarfed on four sides by the gleaming, glass skyscrapers of this modern, sleek city. The hotel’s colonial architecture, marble colonnades, polished teak verandas and lush tropical gardens have offered a slow paced, luxurious stop-over for the well-heeled for over 130 years.

Although located two blocks from the waterfront due to land fill extensions, the hotel was originally built directly on Singapore’s harbor. Armenian hoteliers, the Sarkies Brothers opened a 10-room guest house in 1887 to provide residence for the wealthy in transit and a watering hole for the community’s elite. Within the first decade, three additional buildings were added, and by 1899, the complex, the only hotel in Singapore with electricity, had expanded to include the two-story main structure built around a verdant courtyard. They named it after the founder of Singapore, British Statesman, Sir Thomas Stamford Raffles.

As I took another sip of my decadent libation, I imagined the barroom filled with handsomely dressed sugar and rum traders and their Gibson Girl look-alike companions. The gentlemen nursed gins and whiskeys, as they stood at the Long Bar, so named for the teakwood shelf that ran the length of the hotel’s tavern. Proper British decorum prohibited the ladies from consuming alcohol in public, so boring fruit juices and teas were offered to the fairer sex.

Legend has it that women who traveled to Singapore and frequented this bar at the Raffles Hotel around the turn of the century can thank the Chinese Bar Captain, Ngliam Tong Boon, for freeing their shackles of culturally imposed abstinence. Historians quibble about the exact date, but around 1915, Ngliam created a cocktail that looked like pink fruit juice, but which packed a punch from invisible clear gin and colorful liquors. The birth of the Singapore Sling gave ladies a socially acceptable way to soothe the sharp, ‘Wild West’ conditions of the Far East. Any woman who had been at the hotel that memorable day in 1902,when a stray tiger sauntered into the Billiard Room, was cornered under the pool table and shot by a gentleman sporting his rifle, needed something stronger than grapefruit juice to calm her nerves.

For decades, sipping a Singapore Sling at the Raffles Hotel Long Bar has topped the bucket list of ‘must-dos’ in this city-state on the southern tip of Malaysia. The cocktail is now regarded as the national drink and the building complex was declared a National Monument in 1987. With dutiful determination to experience this traveler ‘rite of passage’, we arrived before the 11 A.M. opening. We wanted to soak up the ambiance of times gone by and swill down the famed potion before the tourist throngs descended.

The lustrous wooden bar stretched across the back wall and despite the early hour, the bartender lined up tulip shaped glasses ready for the onslaught. On average, they serve 2000 Singapore Slings a day, and at $36S per drink, that adds up to a pretty pink $56,000US daily take. We gave the price a passing sigh with the knowledge that in 40 years of travel we never paid that much for a cocktail. But what price, history!

The furnishings consist of traditional cane and rattan chairs and tables, centered with small burlap bags of Malaysian variety peanuts. Singapore has strict laws against littering, to the point that even discarding chewing gum in the street brings a hefty fine. Cracking peanuts open and throwing the shells on the floor feels like a crime but this is perhaps the only place in the entire city where intentional tossing of debris is permitted. However, just in case patrons can’t make themselves litter, a wooden ‘shell’ receptacle sits alongside the peanut pouch.

A spiral wooden staircase in the center of the room leads to a second floor where live music is featured nightly. Above, on the ceiling, rows of palm-shaped 19th century style cooling fans oscillate back and forth, representing the air conditioning technology of the period. The architecture reflects true colonial design with long shuttered windows that transport the room back to a reserved British feel.

But it wasn’t the interior’s motif or the fruity punch-like drink that enthralled me.  The people who graced these halls and what they had been doing there became the focus of my fascination. I wanted to hear their conversations,  I wanted the walls to talk. I wanted the floors to squeal secrets of the past. I wondered what topics Charlie Chaplin or Ernest Hemingway had discussed, if Elizabeth Taylor got drunk on too many slings, what transpired when the Japanese occupied Singapore during WWII and renamed the hotel, Syonan Ryohan, and if the staff quivered when they buried all the silver cutlery and tea-sets in the Palm Courtyard before Japanese officers took up residence there. This is where my imagination took me as I sipped my Singapore Sling.

An annoying din of chatter brought me back to reality. I looked up to witness the evidence that the hordes had arrived: every table and barstool occupied, every patron drinking the same pink cocktail, the frenzied bartender pouring twelve identical tipples at a time, a line forming at the entrance. It was time to go. We forked over the $72 S, grabbed our coasters displaying the unique Raffles Logo and a copy of the original recipe for the Singapore Sling and headed down the sweeping, wooden staircase. We had completed our ‘travel rite of passage,’ and I had loved every tourist-trapping moment.

Critics say that there are many other establishments throughout Singapore, where visitors can get a better tasting, freshly mixed Sling that costs far less. That’s probably true, if just having a drink is the goal. But I doubt that I would be able to see the image of Rudyard Kipling sitting on a barstool.