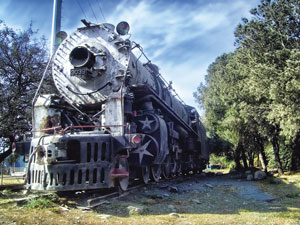 1813 was the year that José María Morelos, then leader of Mexico’s independence movement, summoned a group of delegates to ponder over a Constitution. In that same year a young chap in a coal mining region of England was shooing cows off wagon tracks. His name was George Stephenson, and it dawned on him that a steam engine rigged to a coal wagon might make the wagon go faster than a horse could pull it. So he concocted a steam wagon and dubbed it “Blücher.”

It would be just a matter of time before steam locomotives would crisscross much of the industrialized world. But in 1821, when Mexico finally gained independence from Spain, structuring the new nation superseded building railroads.   Mexico began by crowning an Emperor. When that royal experiment didn’t go as planned, Mexico sent its Emperor packing. When he returned to Mexico hoping to regain his crown, he was met at the dock and hauled off to a firing squad. Then a succession of 49 administrations ruled during the 34 year period ending in 1857.* With that kind of chaos, foreign rail barons had to wonder whether Mexico was a good place for them to do business. It wasn’t. That meant years more of mule caravans and stage coaches.

And it meant dirt roads. The most famous of them was El Camino Real (The Royal Road). Before the Spanish Conquest it was an Indian footpath from present day Veracruz on the Gulf Coast that zigzagged some 200 miles into Mexico’s interior to the Aztec capital of Tenochtitlan, now Mexico City. The Conquistadors used it as the invasion route to plunder Tenochtitlan. It took the Conquistadors nearly three months to make the trip but they had canons and heavy armor to lug over the rugged Sierra Madre Mountains.

Over 300 years later, in 1825, a gentleman from South Carolina by the name of Joel Poinsett (from whom the Poinsettia plant got its name) took the same route. He went that way because it was the least bad way to get to where he was going. He was the United States Minister to Mexico and was headed for his new post in Mexico City. A steamboat first took him from the United States to Veracruz. He then set out on the Royal Road to Mexico’s capital reclined on a couch strapped to two mules.

In time El Camino Real extended north from Mexico City all the way to present day Santa Fe, New Mexico. It had been the gateway for Spain to expand northward and for priests and friars to make Christians out of Pueblo Indians. “Gateway” maybe, but “expressway” it was not. Caravans could expect to travel 10-15 miles a day. Camps along the way were little more than watering holes. Terrified travelers kept their eyes peeled for Apache warriors.There was one particularly treacherous 90 mile waterless shortcut in the north known as “Jornada del Muerto” (Journey of Death). The stretch was aptly named after 574 travelers perished on their way to El Paso in the year 1680. Travel did not get much better until after 1848 when the U.S. Army began building forts north of the Rio Grande. By then railroads were booming in the Unites States, but there were not any in Mexico.

President Juárez (1848-1872) hesitated to build railroads. He thought they could be used by outsiders to invade Mexico. His presidency was interrupted by the French occupation (1864-1867). During that occupation France installed Maximilian as Mexico’s Emperor. Maximilian tried tobuild a segment of rail connecting Mexico City and Veracruz but his Imperial Railway Company went broke before the first train whistle blew. The French were soon overthrown and then it was Maximilian’s turn to face the firing squad.

With Juárez again in office, foreign investors took a second look at Mexico. But it would not be until the tenure of Juárez’s successor, Lerdo de Tejada (1872-1876), that the Mexican Railroad Company (Ferrocarril Mexicano) completed a line to Veracruz by tunneling through mountains and bridging steep canyons. Without British expertise it would not have happened.

President/Dictator Porfirio Díaz (1876-1911),as might be guessed from his nickname “Strong Man,” was fully committed to the iron horse. For him it was full steam ahead. Trains were to be the lynch-pin for industrializing Mexico. There were just about 400 miles of railroad track when he entered office; when he left office there were about 15,000.** He moved Mexico into the 20th century, but at the price of a ten-year Revolution that would claim over one million Mexican lives.

Railroads, of course, did not cause the Revolution, but they had more than a little to do with it. Consider the following:

The Irony. Díaz’s nemesis was the revolutionary leader Francisco Madero. It was Madero who wrote the book that sparked the Revolution. If that wasn’t enough to infuriate Díaz, Madero then went on whistle-stop tours preaching revolution from the rear of Díaz’s trains.

Foreign Investment. Díaz’s trains were financed by U.S., British, and French private investors. That did not sit well with countless Mexicans, especially folk hero Pancho Villa. Legend has it that he and his band of outlaws financed the Revolution by robbing trains. Part of that legend has been documented in the archives of Wells Fargo: On April 9, 1913, Mexican Train No. 7 was chugging through the northwestern state of Chihuahua. Pancho and his menambushed their way aboard No. 7, butchered a passenger, heisted bars of silver (then worth about $160,000), and then held a Wells Fargo agent hostage until they could convert the silver to pesos. Wells Fargo paid up quietly not wanting to be seen as siding with the rebels.***

How could Wells Fargo, much less Díaz, have guessed that the trains would help finance the Revolution?

Governance. Trains created commercial and agricultural centers sprawled all over Mexico. Pockets of political activity sprouted up in distant centers making it hard for Díaz to keep the country under his thumb.

Attitudes. Trains changed mindsets. Trains had been thought to be just for rich people – men in top hats and ladies carrying parasols. True enough, but ordinary folks were suddenly able to board trains too. They may not have sat on red velvet chairs, but they were able to see how the privileged lived and to realize that the world was not without opportunity. Could they join the ranks of the well-off?

New Working Class. Before Díaz’s time, Mexico’s infrastructure had been largely built by compulsory free labor. Mexico’s rails, however, were built in the early stages of Mexico’s market economy. Rail workers were paid wages and were provided housing, clothing and meals. When land was taken for tracks, both peasants and plantation owners were compensated for what was taken from them. This is not to suggest that everyone was treated fairly, but everyone knew they had rights, and the Revolution proved the people would exercise those rights.

Fast Forward. Today the country boasts a strong system of freight trains. Passenger service is essentially nonexistent save for some tourist and commuter trains. But that too may change. In 2013 President Nieto announced a five year infrastructure plan that is to include bullet trains. Should that happen, Mexico would more than make up for its late start.

Blücher’s Epitaph. Little could George Stephenson, in the coal mines of England over 200 years ago, have possibly imagined that his “Blücher” would be such a game- changer in far-away Mexico.