The City Beneath The City 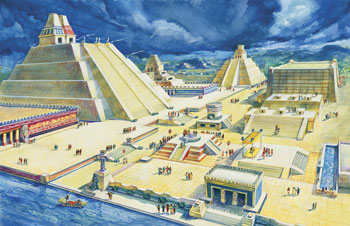 Proudly stands the city of Mexico,

Here no one fears to die in war…

Keep this in mind, O princess…

Who could attack Tenochtitlan?

Who could shake the foundations of heaven?

I remember the big lie my history text told my generation back in the 1950’s, that at the time of Christopher Columbus’s first voyage, there were perhaps a few million Native Americans here.

In truth, a vast civilization flourished in central Mexico alone, consisting of an estimated 25,000,000 people. Approximately 300,000 inhabited its capital city Tenochtitlan, constructed upon two islands in Lake Texcoco, a city so beautiful and advanced as to put the crude capitals of Europe to shame. The capital of the Aztec Empire featured museums and zoos, vast temples, two-story homes, an aviary teeming with colorful tropical birds, and 25 huge pyramids.

Causeways connected it to the mainland. Floating gardens dotted the lake.  An aqueduct brought fresh water into the city from miles away. Each day, the streets were swept and refuse was collected.  Canals crisscrossed the city facilitating commerce. The Aztecs could field an army of 200,000, probably the world’s largest at the time, enabling them to exert dominance over a complex system of vassal states and subject peoples.

The year 1 Reed on the Aztec calendar was a time of dire portents for the people and their emperor Moctezuma, the ninth of his line. 1 Reed was to herald in a new age, one in which the great Plumed Serpent Quetzalcoatl would rise in the east and bring destruction down upon the dynasty, ushering in a new age.  A fiery comet and other natural phenomena added to the growing anxiety. Moctezuma was troubled by reports of strange white aliens making landfall on the east coast, alighting from huge watercraft, men who wore suits of iron and travelled astride four-legged beasts.

On November 18, 1518, Hernando Cortez, a sadistic opportunist, set sail from Cuba with 800 men for the coast of Mexico.  Cortez was to destroy the Empire, demolish Tenochtitlan, and reduce the Aztecs to subservience. The explanations as to how a force of 800 men would bring down an empire of 25,000,000 souls reveal more about the biases of the writers of my history text than they do about reality. We were told that the Aztecs were traumatized by the sight of men on horseback, believing that they were observing centaur-like creatures with four legs and men growing out of their backs.  They were so terrified of Spanish firearms that they fled in terror.

Moving inland, lured by tales of fabulous riches at Tenochtitlan, Cortez formed alliances with vassal states, resentful over the emperor’s taxes and the kidnapping of children to become soldiers or sacrifices. The addition of these new allies swelled the ranks of Cortez’s invasion army. When Cholula remained loyal to Moctezuma, the Spaniards massacred 6,000 of its citizenry.

The Aztecs, a skilled, intelligent people, expert architects, astronomers and surgeons, would not have been fooled for long by mounted men or noisy but unreliable Spanish matchlocks. The Aztecs treated their strange visitors lavishly, providing them with a palace.  Their guests, however, began looting the city and abusing its citizens.  Taking Moctezuma captive, they emptied the treasury.  When the subdued emperor was trotted out in chains, urging his people lay down their arms, a resistance movement grew around his brother Cuitlauac.  Moctezuma was either strangled to death by his captors or stoned by his own people. The Spaniards flung his lifeless body into a canal, causing them to look like the perpetrators.

The Aztecs struck back, surrounding the palace.

After 27 days of being cut off, the Spaniards attempted to sneak across the causeways in the middle of the night. A woman sounded the alarm, and a massacre ensued. Burdened with loot, many Spaniards fell into the canals and drowned. Others died in a hail of arrows. With two thirds of his force lost, Cortez barely escaped Tenochtitlan with his own life.

Temporarily free of their odious visitors, the Aztecs began cleansing and rebuilding their city, but when Cortez returned, he found that smallpox, carried by one of his infected soldiers, had killed over half the population, leaving the survivors sick, weak and demoralized. One smallpox infestation was to follow another until up to 18,000,000 of the original 25,000,000 inhabitants of the empire were to perish. Epidemics of measles, mumps and other European diseases also took a toll.

After a battle lasting four months, Cortez leveled Tenochtitlan to the ground, razing the temples and pyramids and stealing everything of value.  In an act of unspeakable cruelty, typical of the European invasion of the Americas, his men set fire to the aviary killing thousands of beautiful, exotic birds. The majestic city of Tenochtitlan was reduced to rubble. Material salvaged from the ruins was used to construct Spanish government buildings and cathedrals.

To justify their cruelty, Cortez expressed revulsion at the Aztec practice of sacrificing victims to their sun god Huitzilopochtli and to Quetzalcoatl, their rain god, identified with the planet Venus, by cutting their hearts from their living bodies atop the elaborate pyramids.   Spanish squeamishness is difficult to synchronize with their own record throughout the region, where Native Americans were routinely burned alive, infants were thrown to ravenous wolfhounds, women’s breasts were sliced off, and Spaniards would test their swords and their strength by decapitating Indians with one blow.

Thousands were worked to death as slaves in Spanish mines and sugar cane plantations in an era of brutality that rivals the worst of the Nazi holocaust and the Gulags of Joseph Stalin. Truth is, Cortez simply hungered after gold and would commit any unspeakable act in order to acquire it.

He repeatedly set the feet of Cuauhtemoc, the successor of Cuitauac, on fire to force him to reveal the whereabouts of more of the precious mineral.

He told the Aztecs, “We Spanish suffer a disease of the heart, which can only be cured by gold.”

Those Aztecs who survived the epidemics were tortured, raped, murdered and converted to Christianity at sword-point by their cruel usurpers.  Father Bartolomeo de Las Casas, named Protector of the Indians by King Charles V, reported, “The Spaniards have killed more Indians here in twelve years by sword, by fire, and enslavement than anywhere else in the Indies.  They have killed young and old, men, women, and children, some four million souls during what they call the Conquests, which were violent invasions of cruel tyrants that should be condemned not only by the law of God but also by all the laws of Man.  And this does not take into account of those Indians who have died from ill treatment or were killed under tyrannical servitude.”

Today, Mexico City is a large and thriving metropolis, but it lacks the grandeur of Tenochtitlan, the city beneath the city, the foundations of heaven, destroyed by its murderous conquerors in their crazed obsession for gold.