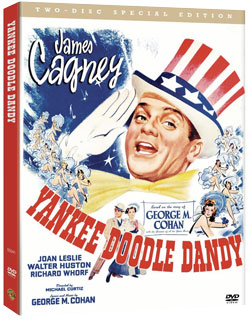 (This article is republished by way of a tribute to the recent sensational LLT show, Hooray for Hollywood, and its knock-out musical presentation of the song Yankee Doodle Dandy.)

It’s been said that hundreds of millions of people have two businesses: their own and show business, this most demonstrable during the movie/TV awards season, when the ultimate prize is the Oscar. The yearly TV presentation is watched by people in virtually every corner of the world—from the fjords of Norway to the savannahs of South Africa to castles along the Rhine—and implicit in this interest is the viewer’s faith in the fairness of the judging.
In a way, however, this huge audience is watching a rigged competition, though not in the normal sense of that pejorative word. Scandals involving ballot-box tampering have never once darkened Oscar’s doorstep. The fix materializes in a more sophisticated manner; e.g., the expensive studio films with unlimited advertising budgets usually do better than their country cousins; the more popular veteran actors consistently fare better than newly-acclaimed upstarts, and  players in the more sympathetic roles are more often given the nod.
Humphrey Bogart, who loved to bite the hand that fed him, once said that the acting awards were hogwash—that the only true test would be if all the actors played the same role, be they male or female; a logical notion, but highly impractical—though to Bogart’s credit, he maintained this sarcastic opinion even after he had won the Oscar himself for The African Queen.
Another element which often taints the awards can be the mediocre quality of the competition in any given year. So just for fun, let’s imagine a mythical contest which includes every Oscar-nominated performance, but all done in the same year—and declare a winner in this Best of the Best competition. My choice would be... and the envelope, please.
Jimmy Cagney in Yankee Doodle Dandy—an early 1940’s Warner Bros. film in which he played the composer and performer George M. Cohan. The role won Cagney the Best Actor Oscar in 1942. In a performance in which his singing and dancing were compared to that of Gene Kelly and Fred Astaire’s, his acting was also second to none. Whether impersonating a much older man, a hopelessly smitten young vaudevillian, a world-famous sophisticate wearing his patriotism on his sleeve, or a brash, yet deeply devoted son, Cagney achieved the ultimate accolade: today, it is impossible to imagine anyone else in the role.
In a marvelous scenario filled with dozens of world-class scenes, one sequence nevertheless stands out, perhaps because it is so unexpected in a movie which could have been just another louder-than-usual showbiz biography: the scene in which Cohan says goodbye to his dying father who had first trained him for the stage.

It is, I think, the most touching scene of its type ever filmed, and greatly aided by the masterful performance of the always wonderful Walter Huston as the elder Cohan. The director, the humorless, often cruel Michael Curtiz, reportedly had giggled all the way through the filming of the last scene at the airport in Casablanca, a scene which he considered utterly laughable—and he did so, causing the scene to have to be shot again and again. By contrast, Curtiz ruined take after take of the shooting of the death sequence in Yankee Doodle Dandy because he was loudly weeping behind the camera.
It’s an actor’s dream to (in one way or another) dissolve his or her director to tears, but few if any other Oscar-winning actors have ever done it in quite the same way as the incomparable Jimmy Cagney.