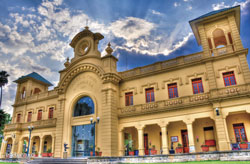 (Ed. Note: This article was first published in the Ojo in November, 2000, but because it contains so much information about not just the plans for the train station but of the history of our entire area, we thought it would be of interest to relative newcomers to our beloved area.)

“I want to put a stop to the rumor that says the old train station my family donated to the town of Chapala will be converted into a disco, bar, restaurant, casino, etc. It was donated for use as a local history, anthropology, and paleontology museum, and as a cultural center for art exhibits, video projection, and cultural activities,” Architect Alejandro Gonzalez Gortazar stated emphatically. He is the son of Don Jesus Gonzalez Gallo, the renowned and respected Governor of Jalisco from 1946-1952, who provided many benefits for the Chapala area, including the road to Jocotepec.

Alejandro presently lives in Guadalajara, but spent a great deal of his childhood, and seven years of his married life in the Lakeside area; thus his love for Chapala. The story behind the old train station goes back to the beginning of the century. President Porfirio Diaz, who was Mexico’s dictator for 35 years, often visited the Chapala area spending Easter Week, accompanied by Mexico City high society, in El Manglar (The Mango Grove), which was owned by his brother-in-law.

That Porfirian time was called “The Belle Epoque,” since Diaz benefited the elite and there were foreigners in the Mexican government. “They flocked in from the four corners of the world, and during this era Chapala became the watering hole and resort of the upper classes,” thus writes June Nay Summers in her well-known book: Villages in the Sun. Ms. Summers was also one of the founders of El Ojo del Lago.

The abundance of wealthy, powerful people in the area awakened expansive notions among a few foreigners who began developing several projects. In 1895 Septimus Craw, an Englishman, built Villa Monte Carlo, a beautiful resort, presently a hotel of the same name. He brought thermal waters from springs in the mountains. Albert Braniff, an American aviator, (and founder of Braniff Airlines) bought a ranch near Chapala and organized gala fiestas and bullfights. He also built an ornate castle-type home on the lakeshore, which is now a restaurant.

In 1910, Christian Shejetnan, a Norwegian, brought together a group of U.S. citizens to build the Chapala Yacht Club, which still operates under Mexican management. Shejetnan’s intention was to turn Chapala into an important tourist center, with a resort and rental chalets and bungalows for snow birds and year-round visitors. He had huge projects in mind, beginning with the railroad line and train station, which would shorten the traveling time from Mexico City to Chapala and from Guadalajara to Chapala. At that time, horse-drawn carriages took twelve hours to travel from Guadalajara to Chapala. When the first road was built, the travel time shortened to six hours. Shejetnan thought that instead of traveling from Mexico City to Guadalajara, and then driving six hours, he could bring the wealthy people from Mexico City directly to Chapala.

In 1920, he got permission to extend a railroad line from Atequiza, Jalisco, to Chapala. Atequiza was an important town early in the century. Since Porfirio Diaz spent the night there on his way to Guadalajara, a theatre was built in 1900 for his amusement. It is the third most important theatre in the State of Jalisco, after the Degollado in Guadalajara, and the Rosas Moreno in Lagos de Moreno.

“The train ran daily... an engine, five red wagons with red velvet seats... carrying passengers morning and afternoon to and from Chapala and La Capilla, where connections could be made to Mexico City,” says June Nay Summers’ in her book. The train station was built by a civil engineer, Mr. de Alba, in the 20s. In 1925, Lake Chapala rose a full meter and flooded the station. The train operated for only a short time - not only because of the flood, but because a paved road was built from Guadalajara to Chapala through Ixtlahuacan, which shortened the driving time to three hours. In 1926, railroad operations ceased.

Mr. Shejetnan had planned to build a five-star hotel next to the railway station, so that tourists could be entertained and toured around on a ship he later built. The hotel was never constructed. The large resort never got out of the planning stage. Only the small golf course next to the RR station in what is today El Parque de la Cristiandad (the park next to the Red Cross building) operated for a while.

The ship however, El Vikingo, with two levels, became a reality at the same time the train was operating. Unfortunately, the three projects: the railroad, the train station, and the ship failed and Shejetnan went bankrupt. The banks took over all of his real estate properties, including the railway station and the ship. The ship was abandoned and left to rot in the lake. The train station was also abandoned for a few years and taken over by squatters until Don Ricardo Aguilar, owner of El Manglar in the 20s, bought the building.

In the late forties, Don Jesus Gonzalez Gallo bought the railway from Aguilar. Gonzalez Gallo allowed the building to be used for theatre productions of relatively short duration. The Lakeside Little Theatre held their first production in the railway station on August 14, 1965, a musical written and directed by Betty Kuzell entitled: From Kokomo to Mexico. Art exhibits and other ventures were also held there. Unfortunately, the former governor and owner of the railway station was killed in an accident and the building became a nesting spot for Chapala’s poor and their donkeys, goats, and pigs.

In 1991, the widow of Gonzalez Gallo, Doña Paz Gortazar de Gonzalez Gallo, and her children decided to donate the building to the town of Chapala, to be used as a museum and cultural center. She received a framed citation from the Ojo for her generosity. The gift was accepted, on behalf of the town of Chapala, by then governor Carlos Rivera Aceves. He promised to help with the remodeling of the building and the construction of the museum, but he did not have time to do so.

Fortunately, the project was taken on by a national organization called “Adopte una Obra de Arte,” (Adopt an Art Work). They restore run-down works of art all over the country. They have already gathered 75% of the 1.5 million pesos required for the project. The state governor offered to match any funds collected by the organization. Mrs. Patricia Urzua de Arce, owner of Villa Niza in Chapala, is in charge of the local program, “Adopte una Obra de Arte Chapala.” Once the building is restored, the museum will be adopted by the INAH (National Institute of Anthropology and History) and a patronato will be appointed to manage it.

“El Mastodon,” discovered in Santa Cruz de la Soledad, will be the set-piece of the paleontology museum. Archeologist Otto Shöndube is also presently selecting some pieces for the anthropology area. There will also be old photographs, videos, and audio-visual projections that will tell the story of Chapala in different eras: Pre-Columbian indigenous, Spanish Colony, modern times, etc. Art exhibits, concerts, and lectures will also be held there.

Gonzalez wants the people of Chapala, the foreign community, and the Ojo readers to know that the museum is already a reality. There are sufficient funds to begin restoration. In fact it has already started. He wants the locals, whether Chapalitecos or foreigners, to feel that this project is their own—to cherish it, support it, and if possible, to donate funds for its completion. El Ojo del Lago wishes to thank Alejandro Gonzalez Gortazar for his devoted interest in, and love for Chapala and the museum project.

(Ed. Note: Since this article was first published, all the wonderful things that were promised actually came to fruition. Some dreams come true.)