The Death Of John Riley— Revisited

(Irish leader of San Patricio Battalion in the Mexican War) 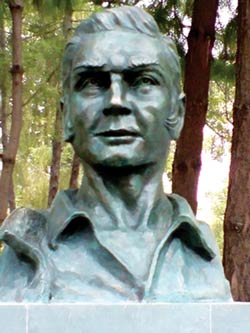 John Riley, the twenty-eight year-old Irishman who is credited with organizing the San Patricio Battalion during the Mexican War, has been the subject of much speculation in recent years. Much of it has come about because of renewed interest in Ireland as it approaches 2013, the “Year of the Gathering,” and new memorials and historic landmarks appear across the country. There have been two such memorials for Riley recently, one a bust in Mexico City, the other a small sculpture in Clifden, Co. Galway.

Riley deserted the United States Army on the eve of its invasion of Mexico in April, 1846, along with a handful of other soldiers, mostly Irish immigrants. During the course of the unpopular Mexican American War, over 5,280 soldiers would defect. Many of them simply went back home or disappeared into the hinterlands; however, several hundred joined Riley and fought on the Mexican side. They formed the Battalion of St. Patrick (Los San Patricios), a crack artillery unit, and were honored by the Mexicans for their bravery in several of the war’s major battles.

At the termination of hostilities, forty-eight were hanged for desertion during wartime. Riley and several others, who defected prior to the war and thus escaped death, were whipped and branded with the letter “D” by a cattle iron on the cheek. The soldier who applied the brand on Riley’s cheek placed it upside down, and was ordered to brand him correctly on the other cheek. The result was a large ugly welt on each cheek which were highly noticeable and commented upon not only during the time Riley served in hard labor, but even years later after he was discharged and went on to serve as a Brevet Major in the regular Mexican Army until the end of the war. Indeed he grew his hair long in order to partially conceal the heavy ridges of scar tissue.

Riley served with distinction in the Mexican army near Veracruz until he suffered from a bout of yellow fever in late 1849 and was sent to Puebla to recover. On August 14th, 1850 he was discharged at the rank of “Permanent Major” with full pay for reasons of disability. He was sent back to Veracruz for his discharge and according to Mexican pay records he received full back pay on the date of his separation from the service, August 14, 1850.

In 2000, Robert Ryal Miller referenced an 1850 death certificate from the Mormon Archives taken from the records of a church in Veracruz which purported to be that of Riley, and it has since appeared on several important genealogical sites. The document was first printed in an article in The News (Mexico City, April 11, 1999) which was then re-published in the Society of Hispanic and Ancestral Research newsletter (Feb. 2000) and which has now received thousands of hits in The Genealogy Forum on-line. It reads: “In the Heroic City of Veracruz, on August 31, 1850, I, Don Ignacio Jose Jimenez, curate of the parish church of the Assumption of Our Lady, buried in the general cemetery the body of John Riley, 45 years old, a native of Ireland, unmarried, parents unknown. He died as a consequence of drunkenness, without the sacraments.”

Although Miller at the time believed this was in fact the death certificate of the San Patricio commander, both his own research and that of subsequent scholars suggest that he was mistaken. Unfortunately, Miller passed away in 2004 before he could write an addendum. I have taken the liberty here of doing it for him.

• The U.S. Army enlistment records from September, 1845 indicate that John Riley was born in Clifden, Co. Galway, and was twenty-eight years old at the time of his enlistment. That would mean he had been born between 1817 and 1818 so would have been 33 years old in 1850.The Juan Riley buried in the churchyard was 45 years old according to the curate. It could not have been the leader of the San Patricios.

• Major Riley was a teetotaler and his sobriety, leadership, ambition and example was commented on by several people who knew him. Even those who condemned his desertion were aware of these qualities. A death from drunkenness would have been highly unlikely.

• Major Riley had been discharged on August 14th with medals for heroism, with uniforms, with a well-equipped horse and tack, with over $800 in retirement pay (the equivalent of $20,000 today). The death certificate for the indigent “Juan Riley” was dated August 31, just seventeen dayslater.

• No robbery was mentioned in any newspaper in Veracruz during this period, nor were there any police reports of big spenders. In such a small town they would have been noticed. Thus is highly unlikely that the well-known and highly decorated major, a redhead over six feet tall and handsome except for his scars, would have been suddenly impoverished and buried (as “Juan Riley”) without last rites in the general cemetery just weeks after his discharge.

• The curate who was attentive enough to state the deceased’s age (“45 years old”), his origin (“a native of Ireland”) and how he died (“as a consequence of drunkenness”) could not have failed to notice that he had two large scars on both his cheeks where a hot cattle iron had branded large “D”s on both cheeks, leaving two high ridges of scar tissue. It was his most noticeable feature and is not mentioned.

My own research in September of 2012 in Clifden, Co. Galway failed to turn up any John Riley who would fit into the age described on the death certificate. Peter F. Stephens, author of The Rogue’s March: John Riley and the St. Patrick’s Battalion, agrees that the only Rileys which fit the profile had to be born in County Galway in 1818, a year that marks the birth of two male children to two different families each of whom were named John Riley, both of which were duly recorded by the Catholic Church records in Clifden, Co. Galway.

The search for the burial place of the true John Riley, Mexican major, decorated hero, and leader of the Irish battalion, must continue. It is hoped that new evidence will be uncovered as both Mexico and Ireland work together in this “Year of the Gathering” to record their common narratives of the past, a past marred by invasions from their Anglo-Saxon neighbors, and mutual histories which have previously been consigned to the dustbin of history.

(Ed. Note: Dr. Hogan is the author of The Irish Soldiers of Mexico, Fondo Editorial Universitario, 1996. His book is the only historical work on the St. Patrick’s Battalion which utilizes Mexican documents in addition to those found in U.S. and Irish archives. The book is available in Spanish as well, under the title Los Soldados Irlandeses de México.)