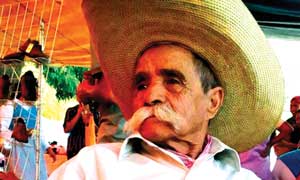 On that last morning, anyone who came to visit me could see that I was dying. I knew it myself. As if I had cotton in my ears, I heard the voice of Don Leandro saying to my wife, “Doña Susana, I think it is time to fetch the priest,” and I thought, yes, it’s time. We don’t have our own priest, or even our own church, so someone has to drive in a pickup truck to get the priest from El Puentecito. But don’t be fooled by what you may hear in Malpasa or in Palpan de Baranda. Here we remain Catholic. Yes, we make pots in the old way. That’s why tourists come here.

And it’s true, as is sometimes whispered, that we have restored certain other practices from the past. But not as they were done back then. Those were bloody and terrible times, the times of the Mejica. They say that the sacrificial blood covered the sun pyramids from top to bottom. Thank the Virgin, we don’t do anything like that.

A little after the priest came and went, I died. Word spread. People came to our house. My family asked first for things of mine that they wanted. Then the other neighbors. Don Francisco stood near my body and said, “Don Ysidro, may I have your shovel? I need one, and your sons-in-law can dig new clay for Susana.”

I said, “Take it with my blessing.”

Susana said, “He says for you to take it.”

Next was Doña Eustacia. She asked for one of my seguetas for scraping pots.

I said, “Of course. Go with my blessing,” and Susana said, “He says for you to take it.”

When Don Tomás came, he asked for my boots, the ones of red leather with the roosters in the stitching.

I said, “Tomás, you thieving rascal! I know very well that you took two of my chickens that night seven years ago to feed to your whore from Puebla. And here you come asking not for a segueta or some wire, but for my good boots!”

And Susana said, “He says for you to take them.” Because, of course, she couldn’t hear me. In any case, I would have let Tomás have the boots. I only wanted to see him blush just one time.

They came and asked for everything that Susana would not need. They asked even for things for which it was not necessary to ask. They asked for things I had already promised to them. They even asked for permission to dig white clay from the place where I liked to find it. They asked, and I said yes, with my blessings. We are nothing if not polite.

Last of all, they asked for a few of my hairs to make brushes for painting pots. They cut what locks there were with scissors. They asked for my hands and cut them off with a knife for butchering goats. They said, “Don Ysidro, we want your face.” I agreed, and they flayed off the skin very carefully and tenderly. They put my hands in a metal drum and burned them. They dried my face in the sun. Meanwhile, they wrapped the rest of my body in a shroud and buried it in the churchyard according to the customs of the Church.

For a time after that, I was in an emptiness, a nowhere place. I didn’t see. I didn’t hear. I couldn’t speak. I wasn’t anywhere, not in my house, not in the coffin in the ground. Nowhere. But that would change.

All my life, I had taught the other people of my village to make pots as I made them. That was nothing special. We all did this. I made my own Don Ysidro pots, except when Doña Isabela showed me how to make her little tiny ones, or Don Marcos demonstrated how he painted his. Then for a while, I would make little tiny pots just like Doña Isabela or pots painted in the style of don Marcos. When Doña Jenífera had gone to the capital to see the birds and animals on ancient pots, she imitated those decorations, showed us, and soon we all knew how to do it. The rest of the time, I made pots in my own manner, though sometimes with a little touch of Isabela or Marcos or Jenífera that I had learned from them and made my own.

Now for the week after I had died, everyone in the village would be making pots as I had made them. Even the children, if they were old enough to make pots of their own. They dug white clay from my favorite place, soaked it, filtered it, let it settle, and poured off the clear water from the slurry. When the clay was dry enough, they mixed in the ashes of my hands. Then they made clay tortillas and pressed them into big plaster molds for the base, just like the ones I used. Sometimes they used my very own molds. They made snakes of clay, attached them to the bases, wound them around from the bottom up. My pots didn’t have necks. Neither did these.

The people—my family and all the rest of the town—scraped these pots smooth, rubbed them to a shine, and painted them with black paint, using brushes of my own hair and in designs I would have used: lizards and rabbits with checkered backs, or else just checkers that started big around the middle of the pot and became intricate at the lip. Those were pots in the Don Ysidro style. They fired them. The ones that the fire didn’t break, they brought to my house. Susana put pots all around the front room, and even in the bed where I had lain.

But I didn’t see this. I only knew it was happening.

These pots in my house sat undisturbed. The people burned the brushes made from my hair.

On the third day, there was a feast at my house. Probably there were all kinds of tamales, some with olives and meat, some with seeds and beans. Men and women drank pulque, and there was perhaps melon water for the children. The sun went down. Candles were lit. A fire burned in my fireplace.

At midnight, Don Leandro opened a box and took out the mask made of my own skin. He put my face over his face, and I opened our eyes. I came from the place that was nowhere. I was in the room. I looked at the faces, at the wide eyes of the living, at Susana holding her hand over her mouth. I saw my grandchildren, Carlos and Jalea, Ana and Quinito. And for the first time, I could see the pots in the living room. They glowed in the candlelight. Together, Don Leandro and I went into the bedroom and I saw the pots there on the bed. We returned to the living room, and I said with our mouth, “I see that I am not dead after all!”

I laughed. That’s what you feel like doing when you see that you aren’t dead.

Then Don Leandro threw the mask into the fire, and I wasn’t in the mask any more. I was in the pots. In all those round pots made by the hands of my friends, my rivals, my family, my neighbors. I was there, in each one. The people took me away from my house, pot by pot, and I entered their houses with them. In my former home, they left only the pot that Susana had made in my style.

From that night forward, I was all over the village. People stored corn in me, or rice, or beans. They used me to carry water. And I spread out from there, for if tourists came to buy pots and happened to admire me, the potter would say, “Oh, that’s Don Ysidro.” And the tourist would nod and perhaps buy the pot that he thought was merely made by Don Ysidro.

I am still in my little village, but I am in Stockholm, too, and Seattle. I am in Toronto and Buenos Aires. Some of me is in Mexico, the capital, though I am mostly still at home here in the village where I grew up, grew old, and died. I sit on Susana’s shelf where I can watch her make ordinary tortillas for her breakfast or clay tortillas for her pots. She is old, but her hands are still quick as birds. Sometimes she knows that I am watching her, and she looks over her shoulder and laughs. Whether she can hear it or not, my answering laughter is deep and full and round like a great big pot in the manner of Don Ysidro.

(Ed. Note: Bruce Holland Rogers will be one of the guest speakers at the upcoming Lake Chapala Writers’ Conference at the New Posada on March 7/8.) 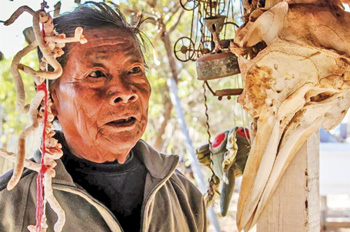