The Mango Orchard:
The Extraordinary True Story of Family Lost and Found 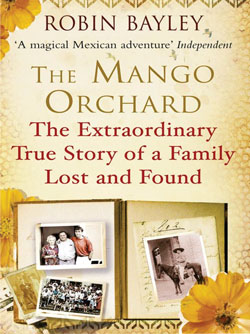 I suspect that more than a few local readers have fantasized about discovering a fascinating ancestor who lived in turbulent times and exotic places and then, by literally following in his steps, bringing that ancestor to life again. We would return with a far deeper understanding of who he was and what he did, but equally important, who we are and what we do.

This is exactly what author Robin Bayley did. As a boy, he had always loved the stories about his great-grandfather’s Latin American adventures: brushes with bandits, wild jungle journeys, hidden bags of silver and a narrow escape from the Mexican Revolution. But there was something in these family tales that he felt was missing: an ending. All of his life Bayley had listened to the stories told to him by his beloved grandmother, stories that usually were about her father, Bayley’s great-grandfather Arturo (Arthur Greenhalgh, born 1874 in Tottington, England) who managed a cotton mill in western Mexico in those challenging years immediately preceding the Mexican Revolution.

Bayley, over one-hundred years later, “was plagued by the same fear about life passing me by.” Visiting his grandmother’s home in Sheffield one weekend, she showed him Arturo’s old suitcase which contained some letters he had sent home from Mexico along with twenty photographs and his actual guidebook filled with notes. That was the moment for Bayley: “In that instant I knew I had to go to Mexico.”

Finally he does arrive in Mexico, in Veracruz, where his great-grandfather had first arrived, and from there he begins to “follow the route he took to Mexico City and Guadalajara and on to Chapala, which might be the place where he lived.” In Veracruz, eating at the Hotel Imperial, where his great-grandfather had stayed a hundred years earlier and considers “I liked the idea that I might have inherited a memory, emotion or unresolved dilemma from Arturo.”

That, of course, is really what the book is about, the sense of something not resolved in the family stories; and that drives Bayley on, even when it looks like the clues have led to nothing. But he goes on, relentlessly pursuing and pondering ideas, new clues, tiny hints, bits of information, until he discovers what the subtitle announces: “The Extraordinary True Story of Family Lost and Found,” a family of some 300 relatives, many bearing his surname, living in western Mexico, treasuring similar memories and even some identical photographs of their beloved common ancestor Arturo, the great-grandfather of the author.

The Mango Orchard is for the most part a sweet story of a family that had some important beginnings in the dark days preceding the Mexican Revolution, a large family that a hundred years later discovers itself more deeply, and then opens to the remarkable love that flows out of this discovery.

[Ed. Note: This is a condensed version of a review that originally appeared in MexConnect at www.mexconnect.com and is used here with their permission.]