Stepping Out Of My Comfort Zone

By Richard (Rick) McGraw
This email address is being protected from spambots. You need JavaScript enabled to view it. 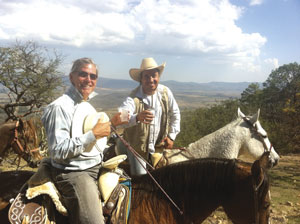 Getting out of my comfort zone on a two-day pilgrimage on horseback to Talpa de Allende with Mexican friends gave me new insights and greater appreciation for Mexican culture and life.

I wasn’t sure whether I was up to the challenges involved, but I took the plunge and am so happy I did because it turned out to be one of the most interesting experiences I have ever had. And I felt compelled to share my story, because it’s not something that many non-Mexicans typically experience.

I was honored by an invitation to join a group of Mexicans from Chapala and Ajijic who wanted to ride on horseback to Talpa de Allende which is about 200 kilometers west from Ajijic and 60 kilometers east of Puerto Vallarta.   My wife Gayle and I have been coming to Mexico for over 15 years and built a home and horse stable in Ajijic four years ago and we celebrate Mexico all the time!

Talpa is an old silver mining town founded by the Spanish in 1599 with a population of 10,000 and home to the Virgin of “Rosario of Talpa.” The beautiful Basilica de Nuestra Señora del Rosario de Talpa that houses the relatively small statue of the Virgin was built in 1782 and is one of the most venerated religious sites in all of Mexico.

Mexican Catholics and others regularly walk, ride horses, drive or bus to Talpa to visit the shrine, but especially during four holy festivals. More than 500,000 people visit Talpa annually and at times swamp the small town with people ‘wall to wall.’ Our visit was during the Feast of Saint Joseph in the early spring of 2012.

The Journey by Horse: music at the crack of dawn

We travelled caravan style from Ajijic to a working farm just outside Estenzuela that belonged to a friend of the organizers. He was so gracious. “My place is yours,” he said.

The guys in charge of food cooked a ‘guy’s meal’ consisting of beef and sausages along with salsa and of course copious amounts of cerveza and tequila. There were only about eight beds available for our group of 28 so some slept on the floor and other places.

A few people were up at 4:00 AM to ready the horses, and everyone, and the horses, were ready and excited to go by 6:00 AM. At that hour it was of course very dark, but we had a full moon to guide us. It was quite spectacular to see this long line of horses heading down the trail in the moonlight accompanied by loud mariachi music coming from several ‘boom boxes’ tied to saddles. Now your first thought might be that mariachi music before dawn would be intrusive, but it wasn’t—it was very Mexican and a lot of fun!

We rode over all kinds of terrain and stopped three times over the next eight hours before beginning the last four-hour leg of the journey for the day. It was the hardest because we were ascending up to an elevation of 8,000 feet at the hottest part of the day. One part of the trail was so steep that some of the horses had to be walked. At one point a fellow rider pointed to an unusual illumination in the foreground and suggested that it was evidence of the special power of the virgin. I had to admit it was totally unusual.

We stopped riding at 6:00 that evening and then traveled by truck to a large ranch owned by yet another friend. After the tired horses were showered and fed, we were treated to a marlin stir-fry and a barrel of good old camarones. Not surprisingly, the riders were far more subdued after 10 hours of riding so everyone turned in early. Again there were very few beds available so most people slept in tents or in the feed room.

Compared with the long day before, the five hour ride on the second day was relatively easy. We of course had the music going at full blast to the delight of everyone along the way. Other than to let the horses drink in a couple of streams, we only made one stop and that was to have a hamburger while sitting on our horses. The last 45 minutes was a spectacular descent down a mountain into Talpa on the valley floor.

The Power of Religion: Religion is major part of the fabric of Mexico and a has historically played a huge role in shaping everyday life and motivating Mexicans. The “Virgin Rosario of Talpa” is said to have special healing powers and many miracles have been attributed to her. Some people also believe if they don’t make the trip to pay their respects, bad things will happen to them.

What struck me were the sacrifices people made by walking such great distances to pray to a small doll. It is hard not to be in awe of the dedication by thousands to their religion. I watched 90-year-old men and women walking in 35C heat on the same trail where even our horses were finding it hard to walk.

The Basilica in Talpa is much larger than the church in Ajijic but has no pews in order to accommodate the thousands of people who stream through every hour. Some actually crawl on their knees the last hundred yards or some even much longer along the main street to show their sacrifice.

Not Made for High Heels: People come from all directions to Talpa. Ours was along an east to west road/trail of more than 100 kilometers that people and horses have been using for more than six decades. Sometimes it’s a road on which a car could travel and other times no more than a walking trail. At times it was very close to well-traveled highways or went through small towns. But most of the time it just wandered through valleys and climbed over mountains. There are refreshment stands every step of the way that feed and refresh the thousands who walk in the intense heat or the cool of the night. It gets so hot during the day that many only walk at night and rest during the heat of the day.

There are no hotels for people to sleep and I never figured out where the people slept other than in cars/buses or under the stars. One reminder of how difficult the trek is was the number of crosses along the trail commemorating those people who paid the ultimate sacrifice while making the trek.

Pilgrims of Every Description: I was also amazed at the variety of people making the pilgrimage to Talpa. There were old men and women in their nineties and babies being carried by young mothers. Young couples and old couples. Individuals and groups of 10 to 20 people such as ours with group names and identical shirts, commemorating their 2012 trip to Talpa. In our case it was a long sleeve shirt with 8 different sponsor badges.

Almost every walker used a walking stick called a ‘mula’ with a multi- pronged grip that symbolizes the head of a horse with ears and eyes that are made in Talpa. I can’t over emphasize the difficulty some people faced to travel to Talpa. Especially considering the changes in elevation, inadequate footwear and physical condition some of the pilgrims were in either because of age or not being in good shape. That said, they all soldiered on without complaint and with a dedication that is totally admirable! Everyone had a friendly greeting!

Breath Taking Vistas: The mountain ranges and valleys of Mexico are vast , beautiful and endless. Those who have traveled by road from the Lakeside area to Puerta Vallarta or Manzanillo will know the type of terrain that the road to Talpa passes through. In some places the ground consisted of sheets or plates of rock with a very smooth surface that looked like they had been poured. At one point one of my fellow Mexican riders said with pride “I just love my country…it is so beautiful.”

During our trip we reached elevations of 8,000 feet compared with 5,000 for Ajijic and were enveloped and shaded by stands of cedar trees and pine forests Traveling though the natural and unspoiled country of Mexico was definitely a highlight for me.

Euphoric Arrival: The closer we came to Talpa the more people crowded on the trail. And the closer we came to the center of town, the more euphoric we became, we rode down the main street three abreast just like in a western movie. For the next three hours the eight piece band we hired serenaded us and the other pilgrims everywhere we went. The atmosphere in the street was festive and celebratory as people stood around watching people and listening to the music.

We eventually joined the steady stream of people into the church to visit with the Virgin. Our band followed us right into the Church playing at full volume. Even with the noise and music, people still managed to find their personal space to pray in the middle of this chaos. The moment was as much a celebration as a highly religious, very inclusive and Mexican.

The Mexican Experience: The trip to Talpa trip was a peak experience for me. The Mexican people know how to enjoy and celebrate life, and are so gracious when they welcome us in their beautiful country. I saw thousands of people on my journey, but not another gringo! Not only did I survive the trip, but also I gained an even greater appreciation for Mexican culture.

So if the opportunity ever arises to participate in a similar trip, get out of your comfort zone and seize it with enthusiasm. See you there! 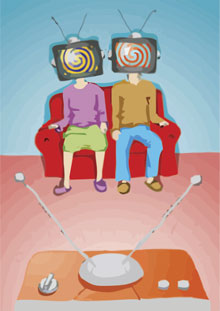