The Old Man And The Mojito 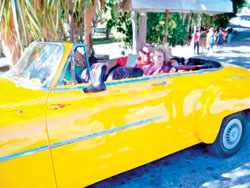 What a better way to start our quest to visit Ernest Hemingway haunts in Havana, the city he adopted as his creative playground from 1939 until 1960, than to take a vintage coupe to his finca, La Vigia (Lookout). Warm Caribbean air breezed through my hair and nostalgic thoughts flooded my mind, as I nestled into the roomy back-seat of the 1951 Chevy convertible. Carlos, our enterprising young driver, drummed his fingers on the leather-covered steering-wheel of this 64 year-old, glistening like new, Detroit-born set of wheels. He sang a salsa tune and maneuvered the sunflower-yellow beauty around pot-holes and past colorful, clapboard houses as we buzzed through the city.

Martha Gillhorn, Ernest’s third wife, preferred larger quarters than his small room on the top floor of Los Ambos Mundos Hotel in Old Havana. In 1939, she rented the house built in 1886 on the 15 acre property, situated ten miles east of the capital in San Francisco de Paula. Hemingway used the royalties from “For Whom the Bell Tolls” to purchase La Vigia in 1940 for $12,500.

We squeezed-out from the backseat when we reached the finca. I envisioned Spencer Tracy, Gary Cooper and Patricia Neal alighting from a classy car to enjoy a weekend with Ernest. We scaled the same steps to the main house that Hemingway used routinely for twenty years–drunk, sober, depressed or enchanted with himself. No access is allowed inside the cream-colored one-story with square columns on the portico–but huge open doorways and large windows provide visitors a periscopic view of the daily life of Ernest Hemingway. Items, frozen in time, remain exactly as Ernest and his fourth wife, Mary Welsh Hemingway, left them when the writer returned to Idaho in 1960 to receive treatment for depression.

I scanned the rooms and found his favorite, well-seated chair, bottles of Gordon gin, African trophies of éland and water buffalo heads mounted on every wall, thousands of books lined-up on shelves and bull fighting posters. On a footstool, lay a Time Magazine with John F. Kennedy’s photo on the cover.

Ernest divorced Martha in 1945. Mary, his last wife, designed and supervised the 1946 construction of a four-story tower, separate from the main house, with the explicit use as a writer’s workshop for her husband. The top floor perch offered dramatic views, excellent light and a quiet ambiance. Up the narrow, winding, exterior staircase to the fourth floor we went, scrunching past visitors trying to come down the same way. Awed by the relic of a typewriter sitting mid-point on the desk, I wondered if Hemingway pounded out the pages of The Old Man and the Sea in this very place. It turns out the climb was in vain. We learned he hated the tower, never wrote one word there, and turned the building over to his eleven cats. They loved it.

La Vigia, restored and reopened to the public in 2007, ranks as the most popular museum in all of Cuba and receives more visitors than the Museo de la Revolucíon. Ernest Hemingway, 52 years after his death, remains a greater icon for the Cuban people than Fidel. Not once in seven days did I hear the name, Castro, mentioned by the common people. Our driver, Carlos, darted from doorway to doorway of Hemingway’s interior space, snapping pictures on his new piece of 21st century technology. He proudly announced that the Cuban people can now own cell phones. His enthusiasm resembled a child with a treasured toy.

We hopped back into the convertible for a short jaunt to the slip in the nearby fishing village, Cojimar, where Hemingway docked Pilar much of the time. The quiet inlet waterway provided a backdrop for The Old Man and the Sea. The bar adjacent to the neglected pier, with its rich mahogany wood, seemed to be caught in the 1940’s and devoted to Ernest. While he was writing his Nobel Prize for Literature, he used to sit in this bar, with a drink in one hand, a pen in the other. Every inch revealed Hemingway portraits and photos of him catching marlins or posing with trophies.

Carlos pointed in the distance to the site of the future Hemingway Marina and the 650 room, $150 million Hemingway Hotel. I learned that tributes to our American icon are being built by China. The US is missing out big due to the embargo.

The hot Havana sun made us fear ‘Death in the Afternoon,’ so we urged Carlos to turn that Chevy toward La Habana Viejo and Hemingway’s favorite watering holes: La Floridita on Obispo Street, and La Bodeguita del Medio, west of the Cathedral. La Floridita served up Hemingway’s favorite libations, frozen daiquiris, which would chill even ‘The Snows of Kilimanjaro.’ His barstool, roped off with velvet swags, gave pause to the thought that Ernest immortalized the daiquiri in Islands in the Stream.

La Bodeguita, ‘A Clean Well-Lighted Place’ it is not, resembles a pigeon-hole joint with graffiti-filled walls, where ‘Papa’ downed many a mint-fresh, rum mojito, a concoction he made-up. I had to scribble over someone else’s mark to leave my own ink behind. Both of these “Hemingway drank here” spots have become so famous, so overrun with European and South American tourists, that the joy of breathing-in a Hemingway moment will never be possible again.

In his acceptance speech upon winning the Nobel Prize for The Old Man and the Sea, Ernest said, ‘Writing at its best is a lonely life.’ With just about every establishment in Old Havana trying to claim at least one ‘Hemingway sighting,’ he would never believe, nor be able to tolerate the fact that ‘In Another Country,’ he has become ‘The Light of Cuba’s World.’