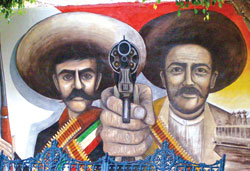 Emiliano Zapata and Francisco “Pancho” Villa shared many things in their short lives, but more than anything they were men who saw and experienced the injustices in their homeland and gave their lives to change their country. Both men were revolutionaries, not politicians; in fact they both felt better leading men and women in battle than in fighting political battles. Both were born into small farming communities, whose inhabitants were mostly landless serfs working the lands of large haciendas where they worked as farm hands, functioned as slaves, and were officially treated as serfs.

Zapata was from the southern part of Mexico while Villa´s home territory was the northern state of Chihuahua. Mexico is nearly as long as the US is wide and as diverse in topography, climate, natural resources and people. Both had some education and as teenagers, became the support for their families when their fathers died. Both men were drafted into military service but managed to complete only a portion of their terms. Zapata was a respected horse trainer and his commanding officer got him transferred to help train horses. Villa was arrested for stealing horses and forced to join the federal army. After several months he deserted because he murdered an officer and stole the man´s horse.

For as many similarities the two were also very different, Pancho Villa was a brash showman, while Emiliano Zapata was quieter and spoke in a high voice. He was known as a man of few words while Villa, who did not drink, could be both an unpredictable man of action as well as quite talkative.

Both men enjoyed their women. Villa was reported to have married twenty six times and at his death his legitimate widow, Maria Luz Corral, had to contend with five other women who claimed to be Villa’s widow and wanted a part of his 25,000 acre ranch. Maria Luz graciously raised a couple of Villa’s other acknowledged children. She also gave birth to Villa’s only legitimate child, a daughter who died in infancy. Zapata had at least six children by various women; his wife quietly raised several of these children.

Emiliano Zapata was born August 8, 1879; the ninth of ten children. He grew up in Morelos, southern Mexico and he spoke both Nuhuatl and Spanish. At17, Zapata became the support of his family when his father died. He married a local mestizo middle-class woman and together they farmed a small rancho. They were porfiristas or supporters of President Porfirio Diaz, who had governed Mexico for 35 years, at the expense of the poor and marginalized.

In 1909, at the age of 30, Zapata was elected to the council of Anenecuilco, where his family had lived for several generations. The pueblo of approximately 90 families was typical of the turn of the century. The people had been dispossessed of their family properties by the Hacendados, large land owners. These actions were condoned by the president, who rewarded the wealthy at the expense and often lives of the ordinary people. Zapata organized and armed 80 men and forcefully reclaimed some of the appropriated farm land for the local people. An interesting note is that the land dispute was taken to the courts where a brave judge found in favor the indigenous farmers. This finding was one of many sparks that helped ignite a nearly decades-long Revolution.

After Diaz went into exile in Paris, Zapata joined with Francisco Madero, whom he hoped would correct the land abuses. But Madero was a “man of promises” who tried to please everyone by doing nothing. Zapata was part of the 99% percent who were still impoverished and decided that in order to be have more equality and greater participation in the future, he would have to forcefully appropriate the large estates, his slogan being Tierra y Libertad, or Land and Liberty. He lacked basic military supplies but was a natural leader. At first he waylaid landowners and merchants but could not confront the army, nor could he take and hold towns against the Federalistas.

Although Zapata was disappointed in Madero because he did not live up to his promise of land reform, Zapata was even less enchanted by the dictator Huerta who in February 1913 had Madero assassinated and then installed himself in the Presidential office. Later Zapata and Villa along with other rebel leaders united forces against Huerta and by August 1914, Carranza, supported by Zapata and Villa, declared himself President. Huerta had fled to Spain and would later die in a Texas prison.

There is a scene, taken from fact, in the movie Viva Zapata, where Zapata and Villa discuss who should sit in the Presidential chair. It is said that Villa sat uncomfortably in the chair but neither man felt qualified to lead the country. Both realized they were military leaders, not politicians.

Zapata continued to organize his home state of Morelos and to implement both agrarian and land reforms. He was a popular, well-liked and respected figure. This disturbed the insecure President Carranza.   When General Pablo González sent word he wanted to defect from President Carranza to aid the Zapatistas, Zapata agreed to a meeting with the General. When Zapata walked into the fortress at Chinameca, Morelos, he was saluted by an honor guard who immediately closed the fortress gates. Zapata and some of his aides were then murdered. He died as he would have wanted: “It is better to die on your feet than on your knees.”

Pancho Villa also died a violent death at the hands of assassins. He was 45 years old in 1923 when he died in an ambush close to his ranch in Parral, Chihuahua. Villa was born June 5, 1879 and named Doroteo Arango Arámbula. No wonder he changed his name, not once but twice. He left his home state of Durango for Chihuahua after allegedly killing the hacienda owner who reportedly raped Villa´s younger sister. Some historians doubt this, but it does enhance a story and several of the movies use this story device as fact.

After the killing Doroteo stole a horse and went north to the Sierra Madre Occidental; once in Chihuahua he joined a group of bandits and changed his name to Orango. He was caught stealing horses and through the intervention of Pablo Valenzuela, the buyer of Orango´s stolen horses, Orango was forced to join the federal army in lieu of execution. In 1903 he changed his name to Francisco “Pancho” Villa after he killed an army officer stealing his horse. For the next seven years Pancho Villa alternated between banditry and more legitimate pursuits, such as mining and horse trading.

When the Revolution broke out in 1910, Villa gathered his rough group of bandits to help Huerta, who at first supported Madero´s plan to change the distribution of wealth, land and political power for all Mexicans. General Huerta saw Villa as an ambitious competitor and accused him of stealing a horse and insubordination. Villa was saved from the firing squad through the intervention of President Madero. Later, with eight men, two pounds of coffee, two pounds of sugar and 500 hundred rounds of ammunition, Villa joined the rebellion against Huerta.

Huerta was known as “La Cucaracha” because he was addicted to marijuana, cucaracha a nickname given to someone who smokes quantities of marijuana. He was also a hard-drinking man who began his day with a shot of sherry, two raw eggs and a glass of hard liquor. In the end the name of Villa has more recognition and more respect than that of the former President of Mexico.

Villa was a great talker and by early 1914 he was able to assemble an army of both Mexican and expatriates from several countries. He was a showman who understood the importance of good press, financing and leadership. He forced assessments on hacienda owners, robbed trains and banks, held people hostage and in 1913 when he was governor of Chihuahua he printed money, as did most regional leaders of his time. For a fee he allowed journalists to accompany him on the battlefield. He was the first to make use of airplanes to observe troop movements and drop explosives onto enemies below. For 50% of the profits he allowed Hollywood to film his war tactics. These reels were used by the US army to study Villa´s strategies.

For this article I twice watched Los Rollos Perdidos de Pancho Villa, or The Lost Reels of Pancho Villa. Villa himself appears in four movies about his life and there were numerous movies about the man. The 1934 biopic Via Villa! was nominated for an Academy Award for Best Picture. Some famous Hollywood actors have played the man, including Wallace Berry, who twice played Villa; others have been Alan Reed, Yul Brynner, Telly Savalas and Freddy Fender.

Many in the US vilify Pancho Villa for his March 1916 raid on Columbus, New Mexico without understanding the cause. Villa and his army had been betrayed by a US munitions dealer who sold Villa defective guns and munitions. Intrigue was a part of Villa´s mystique. There are banking records that show in 1915, the Germans funded $340,000 to the Western Cartridge Company, a fact that both US President Wilson and Carranza used to besmirch Villa´s name. However, the Germans, who were building up for a European war, were looking for Mexican support against the US, whom they were sure would enter the coming war on the side of the British and French.

Villa retired in 1920 to a 25,000 acre ranch that the Carranza government gave Villa for his services. The Mexican government also gave him 500,000 gold pesos to support the 50 guerrillas who remained with Villa as his personal body guard. However, July 20, 1923, Villa was assassinated when seven armed men pumped 40 bullets into his car, nine of which entered Villa´s body. Two body guards died and one was badly wounded. The unproven theory was that President Carranza feared the ever popular Villa would run for President.

Both men are sometimes accused of being ruthless murderers; however this was a revolution and not a picnic. The Mexican Revolution began almost exactly eight years before the Russian Revolution and far fewer people were dead at the end in Mexico than perished in Russia. 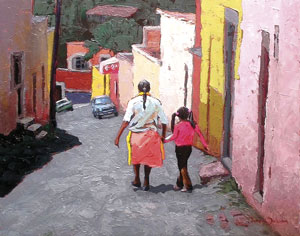