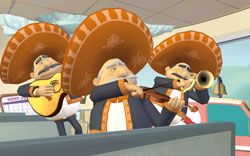 When we think of the peoples and cultures of modern Mexico, three things invariably spring to mind, and every one of them had its origin in our adopted state of Jalisco! The Mexican’s favorite pastime of listening to the lively music of mariachis while watching the riding and roping of the charros while sipping tequila says much for the fun loving nature of these people. But it is the distinctive sound and irresistible rhythm of mariachis that instantly invokes the image of gay caballeros and laughing señoritas dancing the Jarabe Tapatio, known to the rest of the world as the Mexican Hat Dance.

Mariachis first appeared in Cocula in central Jalisco sometime in the early 19th century, but the first verifiable mention of them is in a letter from a Catholic priest written in 1852. This poses a weighty argument against the folk etymology that claims the word “mariachi” derives from the French word for “marriage.”

This is extremely unlikely, since the French did not arrive in Mexico until 1864 and it isn’t on record that any Frenchman ever set foot in Jalisco, much less got married here. Other possible derivations, such as the claim they were named after a Virgin called Maria H. (Mah-ri-ah-chay), are even more far-fetched and, in fact, we may never know exactly how the name evolved.

Not that it matters. Mariachis and their music are the heart and soul of Mexico. They take their themes where they find them; love, betrayal, death, revolution, heroes and heroines, machismo, plants, country life, animals and even the lowly cucaracha who cannot walk because she has no marijuana to smoke. Mariachis are on hand with special music for every holiday and fiesta whether it be Mother’s Day, Independence Day or a young woman’s fifteenth birthday.

Music has always been an important part of Mexican life. Cortez found the natives playing and dancing to the music of gourd rattles, reed whistles, wooden drums, reed or clay flutes, tiny silver or golden bells and horns made of conch shells. They quickly and enthusiastically adopted the brass horns, woodwinds and stringed instruments like guitars, violins, and harps imported by the Spanish. These were intended to provide music for Church Masses but the natives had other ideas.

They not only learned to play these foreign instruments but were soon producing their own, sometimes with shapes and tunings of their own invention. Some of these, like the high-pitched round-backed vihuela, the Mexican folk harp and the deep-voiced guitarron still play integral roles in today’s mariachi music.

Indians and Mestizos alike were soon playing their new instruments for village festivals where they played the lively, foot-stomping sones and jarabes, many of which have become popular outside Mexico. Typical examples are the son jaracho, called La Bamba, the son huasteca or La Malagueña and the aforementioned jarabe Tapatio. These dances were performed on the tarima, a wooden platform sometimes elevated on clay jars that amplified the staccato heel beats of the dancers.

The rapid stomping beat of the zapateado, a distinctive type of footwork originating in Spain, is the basis of such sones as the jaliscience and is so forceful it has been known to reduce the hardest of wooden dance floors to splinters.

Playing for Spanish social occasions and dances required the Mariachis to add waltzes, polkas and other European dances to their repertoires, while playing in theater orchestras demanded still other musical forms. But their lively rhythms and often scatological lyrics were too profane for the church, which considered them pagans of the worst sort.

In time, they became the wandering minstrels of the New World, bringing the current news and the latest songs and dances to remote native villages and isolated Spanish haciendas. In either place they were heartily welcomed and provided with food and lodging for as long as they chose to stay. Some haciendas hired them on a permanent basis at a larger salary than any peon could hope to earn.

Poorer villages could only offer a small stipend to help them on their way to their next stop. Such groups were small, usually only four men playing two violins, a vihuelo and a guitarron and singing to their own accompaniment.

The 1910 revolution changed everything. The few haciendas that still existed after the revolutionary armies under Villa, Carranza and Zapata finished their vindictive burning and looting could no longer afford such luxuries as mariachis. Hitherto isolated and unknown outside their own small worlds, Mariachis were forced to seek audiences in the cities, where they performed for a fee. It was necessary to learn new musical styles and, in time, brasses were added to the original all-string ensembles Today, a standard group consists of two or three trumpet players, three or more violinists, and men playing the vihuela, the guitarron, the Mexican folk harp and the Spanish guitar, most of whom sing as well.

In the early days there were no fancy identifying costumes. True, the small groups were dressed alike, but only because they wore the same clothing as all the other peasants in Mexico. White cotton shirts and trousers, huaraches and broad- brimmed straw sombreros were the uniform of the day. It was not until after the 1910 revolution that mariachis began to wear the distinctive costume of the Charros.

Today, silver studded short jackets and tight fitting pants flared at the bottom to accommodate short boots, embroidered belts, flowing bow ties and lavishly decorated sombreros are as much a part of Mariachis as their music.

These distinctive costumes were soon highly visible at fiestas and political events such as presidential inaugurations. The introduction of new entertainment forms served to spread their fame. Performances on radio, phonograph records and in motion pictures did much to increase the exposure and popularity of mariachis and their music in the early 1900s. Those early movies in which they appeared focused on the machismo which has become an integral part of their mystique.

By now, mariachis had become such a national treasure that even the Roman Catholic Church finally relented and accepted them. In 1966, Father Juan Marco Leclerc astonished his Cuernavaca congregation by allowing the performance of the first mariachi mass. The Misa Panamerica is a folk mass sung in Spanish to the accompaniment of mariachi instruments which is now frequently performed throughout Mexico and in the United States wherever there is a sizeable Hispanic population.

Now, if the Church used tequila instead of wine for communion and held charro contests in their courtyards after mass they might be surprised at how many backsliders returned to the fold. 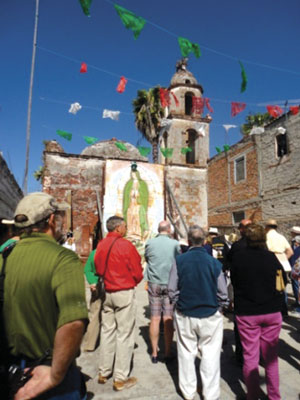