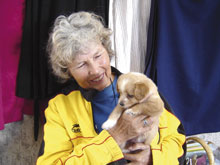 In  the summer  months  Anita had  an  increase of adult dogs & cats  being  turned-in to  her. The months of October and November  was  a period of  prolonged “puppy season”. In just a two week period alone, Anita accepted a nursing mother dog with her 10 puppies, another mother  and  7 pups, a litter of 9 puppies rescued by a worker at a construction site after  two had been already found dead  near  the side of the road, several more litters of nine, seven and eight, etc. The question seems to pop up periodically in some  people’s  mind:  why does she take them all in? The more obvious questions should be: where else will they go and be taken in and cared for? A kitten or puppy should  not be penalized and killed  by any means – abuse, neglect, “the needle”, starvation, etc. because humans have failed to take responsibility for spaying & neutering.

The safety of your dog  as he/she  rides in your car needs to be considered. Ever see a dog riding along with its  “parent” at the wheel  and the dog has his head all the way out the window to sniff the air?  It looks  so invigorating, but this “open window” policy might need your reconsideration. This action might be an accident waiting to happen. Consider this—if a flying rock coming out of no-where can break or crack a car windshield in an instant, imagine what it can do to your dog’s head or eye. What would happen to your pet if you suddenly have to slam on the breaks, and your dog is in your lap or hanging out the window—you have just created a “projectile missile”  flying through the windshield or out of the window , possibly onto the road to be hit by a car. Another possible risk - you might have impulsive behavior. It might not have happened in the past, but dogs like people are sometimes unpredictable  at  times, and you will have to deal with a dog trying to leap out the open window as you are zipping along the road. Something to think about.

Anita’s Animals wishes to thank the LFA/Lakeside Friends of the Animals  for the last seven  years of their support. They provided for a time some spay- neutering surgeries when their funding and donation volumes allowed for this particular assistance. The last two years LFA provided Anita  with a pet food “credit” of 3,000 pesos / month, which was to be utilized exclusively at the Animal Shelter Pet food store. At this time, effective January 1st, 2012, LFA will be unable to support  Anita  any longer, due to their own organization’s financial circumstances.   LFA, Thank you again!

The holidays are fast  approaching  and many people have already started to worry about finding the ideal gift  for that special person, either near or far away. You can eliminate the concern that you may not have bought the right size, color, style, or get it wrapped and mailed in time for the holidays.     Think about making a donation to a charity you like or prefer, and make that donation to that organization in that person’s name.  You will have honored that person, and done a good thing as well. www.anitasanimals.com  -  has a PayPal account for donations. Happy Holidays!