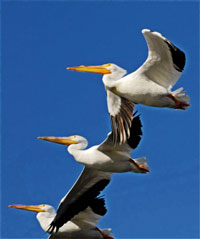 The first flocks of early arrivals are back. Over the next several weeks they will return to Lake Chapala in the thousands. No, I am not referring to the Canadian and American “snowbirds” but their original natural counterparts, the American White Pelicans that have been returning to winter on Lake Chapala for thousands of years. They are true ambassadors for NAFTA free trade agreement, linking all three countries, breeding and nesting on the northern lakes of the USA and the Canadian prairies, then spending their winters here in Mexico.

Lake Chapala hosts 5,000 White Pelicans each winter, representing about three percent of the total population which is estimated at 180,000 birds. The vast majority of the Lake Chapala birds are found toward the eastern end of the lake where there is more natural marshland.

In the island village of Petatan on the south shore of the lake, the local family operated fish-fileting operations feed the pelicans the entrails from the daily catch. At predictable times of the day a wheelbarrow of fish parts is wheeled out for the pelicans. This is one of the best places in the world to observe White Pelicans at close range. You can see them in huge flocks of hundreds, if not thousands, of birds. Smaller numbers can also be seen along the waterfront of Jocotepec, Riberas and Chapala.

The American White Pelican is very different from its smaller cousin the Brown Pelican which is commonly seen along the Atlantic and Pacific coasts. They differ not only in appearance and behaviour, but also with respect to preferred habitat. The Brown Pelican is a seabird, preferring coastal salt water, and dives like a falling rocket for its food.

On the other hand the American White Pelican is primarily an inland, freshwater bird that swims gracefully atop the water, often in small groups, herding schools of fish into shallow areas, and then scooping them up with their large orange beaks.

I will always remember the poem by Ogden Nash:

“A wonderful bird is the pelican,

His bill can hold more than his belican,

He takes in his beak enough food for a week,

But I’m damned if I know how the helican.”

An ungainly looking bird on land, the pelican is a magnificently graceful bird when in flight. It is one of North America’s largest birds, growing to a wing span of three meters (9 feet) and weighing 11 kilos (25 lbs). Seeing a large flock of them high above the lake with wings outspread, soaring, circling, and gliding, their white bodies reflecting the sunlight against a clear blue sky, is truly one of the wonderful sights in nature, and one we are privileged to witness here at lakeside.

Highly dependent upon fish, the White Pelicans occupy a dominant position in Lake Chapala’s food chain, making them an excellent indicator species for judging the area’s environmental health. While the fish in Lake Chapala tested by engineer Dr. Todd Stong have been found safe for human consumption, this testing has been specifically focused on the edible parts of the fish. Stong would like to do further fish testing to see if the heavy metals known to exist in the mud around the Lerma River estuary might have an adverse effect on the pelicans.

John Keeling, head of Lake Chapala Birders, notes that the overall North American White Pelican population has been increasing substantially every year since the banning of DDT back in 1972 when the populations were in very serious decline.

While American White Pelicans are long lived, each female lays only one or two eggs per year which does make local populations vulnerable if there are problems at their nesting sites. The birds will not produce offspring if bothered by humans or predatory animals or if there is flooding at their chosen refuge.

This is precisely what happened this year according to retired Canadian wildlife biologist Chuck Dixon. Due to record spring flooding at sites in Saskatchewan and Manitoba, significant numbers of adult birds were forced to abandon their nesting sites and as a result these breeding colonies were unproductive this past summer. The impact this may have on overall bird populations is unknown at this time.

We residents here at lakeside enjoy a unique opportunity to observe these wonderful original “snowbirds” first hand. The two-hour drive to Petatan offers a world class experience truly worth the trip. If there were to be a bird nominated to represent Lake Chapala, my choice would definitely be the American White Pelican, both for its grace and beauty and also for its natural ambassadorial role linking Mexico with the United States and Canada.

Uncommon Common Sense - September 2014
UNCOMMON COMMON SENSE By Bill Frayer The Millennials Are Coming!   I am a baby boomer, as are many readers of the Ojo.  We grew up in simpler