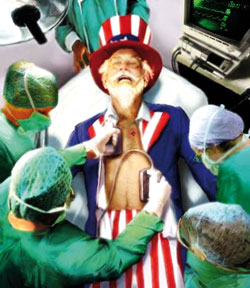 Osama Bin Laden once said that while Al Qaeda could never hope to militarily defeat the United States, the country could be driven into near-bankruptcy. Today, can anyone deny that this has not happened?

It started with the infamous attack of September 11, 2001—an unconscionable act that hurled America into a cauldron of boiling indignation. But rather than specifically seek out and destroy members of the murderous organization that planned the attack, US leaders tragically over-reacted—as Al Qaeda must have known they would.

The response should have involved (metaphorically speaking) a high-powered rifle with a telescopic sight; instead, they employed a huge cannon, invading and occupying Afghanistan, a sovereign country—a nation in which ten years later, we are still mired with little hope of leaving in the foreseeable future.

In those ten years, the US has squandered the lives of more than 1500 American warriors, only to in effect perpetuate an utterly corrupt regime whose main source of income is American dollars (borrowed from China!), and the Afghan heroin trade—which is managed in part by the brother of the president of the country. One would think that the Vietnam War (where soldiers fought and died to prop up a long series of craven and corrupt governments) would have taught the US that equally important as who it is fighting against is whom it is fighting for.

Yet, soon after the US entered Afghanistan, there seemed a good chance that it could quickly eradicate the Al Qaeda, and pull out. Instead, the US peeled off much of its military and sent it to Iraq—a country that had absolutely no connection with the 9/11 attack. If that were not catastrophic enough, the war was abysmally managed. Now, eight years later, the US is finally pulling out, having lost 4,500 American soldiers and (again) billions of dollars—though the US was repeatedly assured by the Bush administration that the Iraqi oil would pay for the war!

Immorality morphed into stupidity when, in a stunning turn of events, the US allowed the Iraqi oil concessions to go mainly to China, which without firing a shot, losing a single soldier or spending a solitary Yuan, emerged as the big winner of the Iraqi War. While the US was invading countries, China was investing in them. Another tragic misconception was going from fighting terrorists to fighting insurgents—a battle that is rarely won. Moreover, irony of ironies, we pushed Iraq into the arms of its historical enemy, Iran—a country that unlike Iraq, can really bloody America’s nose. If the men who ran American foreign policy had been CEOs of major corporations, they would have been quickly ousted by furious stockholders!

As for the rarely-mentioned human cost of the two wars, more than 224,000 have been killed and almost 8 million civilians have been displaced. (Cost of War Study-Brown University)

Another sucker punch: Al Qaeda made the US so paranoid that it is now afraid to cut its military costs, though the Pentagon budget is larger than the military spending of all the rest of the world combined. Eisenhower (a vastly under-rated president) warned about the “military-industrial complex” way back in the 1950s, but today, at a time when the US economy is dangerously close to going on life-support, hardly a dollar is ever cut from the military budget.

So the US is left with a Five Trillion Dollar Deficit, and an ongoing expense of Two Billion Dollars a week to wage the war in Afghanistan—a nightmare caused in part by George W. Bush’s decision to finance these military misadventures by borrowing the money rather than the traditional method of raising taxes.

Further, the same hysterical mind-set causes the US to maintain more than 900 military bases around the world. Upshot: The government is currently spending $1.6 trillion dollars per year more than it is taking in—a disparity that even the Roman Empire could not have sustained. As for the fast-fading American Empire, may it Rest in Peace.

President Obama has done little to improve the dire situation. Granted, he inherited a Mount Everest of critical problems due to Bush’s policies. Yet, at a time when America is bleeding profusely from several grievous wounds, Obama has himself added troops to the Afghan War, this even as the US does not control more than 29 of Afghanistan’s 280 provinces, and whose prime minister regularly thrashes the US, calling its soldiers “occupiers.” Moreover, the US government now admits that no viable terrorist threat has come out of Afghanistan in more than seven years.

Obama has also committed the US to a major (and now possibly illegal) misadventure in Libya—a country that poses absolutely no danger to America, but which is costing it 300 million dollars each and every day.

The most unforgivable thing a president can do, however, is send soldiers off to fight and die—or end up permanently maimed—in an unnecessary war. Yet, as GW Bush did, President Obama cowardly passes the buck, saying he has to rely on the advice of his generals. But he confuses tactics with strategy: the decision to go to war and when to end it is a political decision; the way a war is waged is quite properly the province of the military.

A straight-talking, clear-thinking Republican presidential candidate, Jon Huntsman, believes that if the US stays in Afghanistan only until the proposed cut-off of 2014, the cost to the American people will be another quarter of a trillion dollars!

Bottom Line: US wars since 9/11 have cost at least 3.7 trillion dollars (Cost of War Study-Brown University) with an astounding (if comical-sounding) 20 Billion for air-conditioning in Afghanistan and Iraq.

Imagine the social/economic/educational/scientific/medical/artistic/ environmental benefits that could have been achieved, had those dollars been spent in the United States!

The Al Qaeda and their slimy ilk, wherever they are, must be smiling.