The Enchanted Village of Ajijic 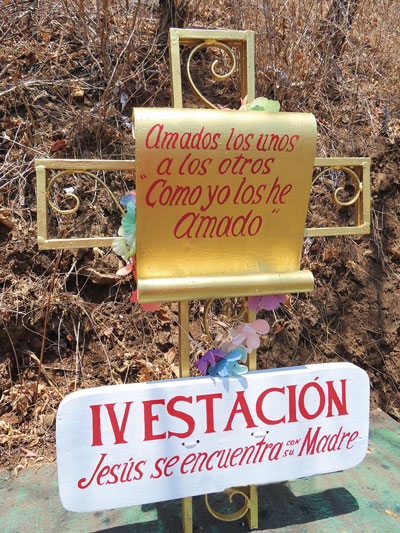 The Thirteen Stations of the Cross have been a fixture up the Ajijic mountainside from Calle Juarez Privada, just west of the end of Calle Colon, for a very long time.

Where the first Station begins at street level, the last of the thirteen Stations stops well up the mountainside and a few feet shy of a well-considered open Shrine and is visible from downtown Ajijic.

Known as the “Meditation Trail” to many, the pathway has long attracted dedicated residents who walk it for meditation reasons, for travelers who walk it given the trail is one of Ajijic’s popular tourist attractions, and finally, for hikers who simply like scaling the mountain but can do so in the company of the 13 Crosses, all of which have a sign attached to describe the significance of that specific cross.

Over the years, many of the Stations have deteriorated and were very much in need of repair.  Some of the cement pedestals to which the crosses were affixed had disintegrated and needed to be repaired and repainted.

One of the stations was so bad that the cross was simply lying flat on top of the pedestal. In addition, the signs affixed to each Station were either faded, not legible, or had completely disappeared.

For one Canadian Snow Bird who winters in the Lakeside area annually, he saw an opportunity to give something back to the local community for the kindness it extends to those who either visit here or come from abroad to live here.

Thus, sponsoring the refurbishment of the Thirteen Stations of the Cross provided an opportunity to celebrate Easter and to give something back to the local community to ease everyone’s Covid-19 fatigue and to provide an additional reason to refer to Ajijic as an “Enchanted Village.” He was able to facilitate the renewal of this “Meditative Walk” by retaining the services of local residents to take on specific jobs to complete the bi-cultural project.

The colors were strategically selected.  The cement pedestals were painted a gloss black with a green streak running through.  The black represents the darkness that fell upon the earth following “The Crucifixion.”  The green streaks represent the diminished faith many experienced on that fateful first Good Friday as they pondered whether something miraculous might evolve from the Crucifixion, which is precisely what happened with the Resurrection and the proclamation that “He is Risen.”

The color selected for the crosses was a radiant gold, reflecting the enormous significance of the Resurrection to humankind. The signs, painted by local artist, Sr. Jose Duran, are a bright white with the description of each cross written in red.

Given the weight of all the signs, the Canadian asked a friend named Ron to help him out on Holy Thursday to complete the project by affixing the newly painted signs to the crosses. They headed up the mountain together.

At the seventh or eighth cross, while the Canadian was attaching the sign to the cross with a plastic tie, he heard Ron exclaim, “Oh, my goodness, Jesus has just arrived.”  The Canadian turned to see someone who looked like Jesus standing on the path below the cross he was working on. He thanked both of us for doing the job of repairing the crosses and the walked off.  He was only there for about fifteen seconds.  No sooner had “Jesus” disappeared from sight than a thought crossed the Canadian’s mind that he should have taken a photograph of this peculiar rendezvous.  In fact, with the passage of time, the Canadian became very self-critical for failing to do so given he was carrying a camera.

What made the moment more significant is the fact that after the Resurrection, Jesus appeared before groups of people to show them that He had risen from the dead.  He did this to ensure that multiple witnesses experienced His presence.  In essence Jesus appears to prefer witnesses over cameras. Given this was the only time that Ron had participated in the project, this was the only time that there were two witnesses together. Whoever this individual was, he certainly created a memorable incident in the final moments before the project was completed.

In appreciation: For the matter to move ahead it required the support of Sr. Juan Ramon Flores, Delegado Municipal De Ajijic. His support of the project was much appreciated.

The sponsor simply wishes to be referred to as an appreciative Canadian who has wintered in this neighborhood annually for more than ten years.

The refurbishment of these Thirteen Stations of the Cross is dedicated to the memory of the many individuals who have disappeared in Mexico over the last two decades.  Wherever their souls might be, they are surely at Peace.

Following upon that dedication comes a second one, a prayerful thought, one extended to the many loved ones who have had to live every day wondering about the fate of the loved ones who have disappeared, may they know that their loved ones have returned to their Creator and are at Peace.