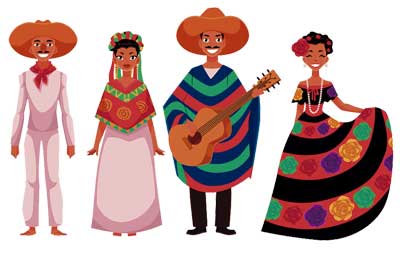 When friends up north have trouble understanding why we moved to Mexico, I often tell them this story. It goes so far beyond our perfect climate and affordable economy into the heart of what makes the Mexican people so special.

Some years ago between Christmas and New Year, my husband and I received a call from our son Richard to say that our son Nigel was critically ill with what appeared to be acute encephalitis. The prognosis was uncertain and so Richard had made reservations for us to fly to Toronto the following day. That night there was a massive snowstorm all the way down the Eastern Seaboard of America. When we arrived at the airport in Guadalajara next morning, we found that planes were backed up all over the continent. Our connecting flight to Mexico City was delayed indefinitely and there was no alternate they could offer us. We sat there in agony for the next four hours and were eventually given seats on another flight that might, or might not, reach our Toronto flight on time.

Luckily, both flights were with Mexicana, now sadly defunct, so we got off the plane in Mexico City and literally ran as fast as we could to the connecting gate for Toronto, arriving just as the plane headed off towards the runway. The attendant at the desk politely told us we were too late. At this point, my nerves broke and I burst into tears saying that we had to get that flight because our son was dying. Her attitude immediately changed and she asked us to sit down and she would do what she could. A few minutes later she led us down some stairs to a waiting car, gave me a big hug, and wished us well. We drove right out onto the runway where the plane was lined up with some others for takeoff. As the plane was moving slowly, we drove alongside for a few hundred yards until it stopped just long enough to drop the stairway and take us on board. They had upgraded us to first class and we collapsed into our seats, both in floods of tears. We were on the plane to Toronto, without any luggage of course, but we had made it so far! The flight attendants were full of kindness and compassion, insisting that we have a drink and something to eat and, if possible, got some sleep.

We arrived in Toronto mid-evening to find the blizzard was so bad that they had cancelled all ground transportation and we had to get to Hamilton, Ontario, normally about an hour’s drive away. There were hundreds of forlorn passengers and very few taxis, but most of these people understood our urgency. We were really lucky to find a taxi driver willing to drive to Hamilton in these extreme conditions, for a double fare and a bed in a motel for the night. About three hours later we made it safely to the hospital and found Nigel critically ill but able to recognize us, at least for the next few hours. This turned into the worst month of our lives as we watched our son lying there unconscious, intubated, and fighting for his life. Duncan and I took over looking after the four children of about four to 11 years old, so Meighan could stay in the hospital, and this kept us busy to the point of exhaustion. The kids were really suffering through this, but were able to console each other a little and the neighbours were amazing with their gifts of food and offers to babysit.

I shall never forget the incredible kindness from so many people, in both Mexico and Canada, who were prepared to do whatever it took to help us. I am sure that the Mexicana staff and aeroplane crew broke all the rules in the book and risked their jobs to get us onto that flight, and I will cherish their kindness and selflessness for the rest of my life. God bless Mexico!