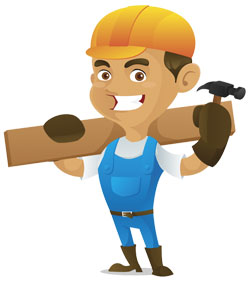 He’s twelve years old. We’ve known him since he was four when occasionally he’d come to our place with his dad. His name is Gabriel, as is mine. Schools are closed because of the coronavirus lockdown and for the past month he’s been working with his dad.

Gustavo has been our contractor for the past nine years and has done all the renovations on our casa since we bought it ten years ago, in its rundown state, having chosen to live six months of the year in Ajijic. He’s just finished building a little patio and a brick wall that surrounds it. He’s also cleaned the exterior brick walls of an ancient water tower that we own which we plan to convert into a casita one day. His current job is to waterproof the planters on our casita roof to be filled with Christ-thorns. Gustavo can do almost anything, and Gabriel has been on the job every day.

Cris is twenty-six. He’s Gustavo’s nephew and Gabriel’s cousin. We’ve known Cris since he was seventeen, when he was Gustavo’s peon. He’d be given simple jobs and we grew to really like him with his ready smile and the way he was so helpful. We could tell he was smart, a quick learner and has become a good contractor in his own right. He had no English back then, but in nine years he’s now got quite a bit. He’s been doing Saturday classes to finish high school with the dream of going on to study to be a dentist. Like so many people from other countries who have chosen to make Lakeside their home and who have learned to love the Mexican people, we’ve done our bit to help Cris with his education.

Then there’s Rosendo, the eldest of Gustavo’s six children. He’s twenty-seven and is married with two daughters aged nine and four. He’s lanky with a stunning smile and smokes a lot. He’s Gustavo’s backup person and can’t always be there when he gets other jobs.

That’s the team of four who work in the blistering heat on our casita roof. This morning, to start the day there were only two of them: Gustavo and Gabriel. Gustavo was lining the second planter with tiles before the soil could be put back and the Christ-thorns replanted. Gabriel had nothing much to do, but was happy to have his father all to himself without the other two “big boys” around. He chattered away nonstop in his little-boy voice, while Gustavo, head down and focused on his work, never once got irritated. Occasionally he’d answer in monosyllables.

I got to thinking about this young boy’s upbringing. Gabriel comes from a big family which, as far as I can see, is a happy one. We’ve met Carmen, Gustavo’s wife, who generates an aura of kindness and calm. We’ve seen the way these men work together. Gustavo has never let us down. He learned his trade from his father, who belonged to the previous generation of village contractors. He proudly showed us an example of his father’s work, the roof of an historic building of what is now called the Hacienda del Lago, a boutique hotel, restaurant and spa in the west end of Ajijic Centro.

Ever since schools closed, about a month ago, Gabriel has been putting in a full day’s work. Granted he only has to fetch and carry tools and sweep up a bit, but he’s learning so much. Granted he does a lot of hanging around, looking a bit bored, but he never complains or whines, knowing that when he’s asked to do something, he must “jump to it.” Most of all, he’s learning his father’s trade from being around him. He’s learning that he is respected because he’s included in the team. He’s learning how the grown-up men communicate and work together. He’s watching and interacting with three mature and decent men. They joke together and he is not excluded. We hear his peeling laugh and even giggling as he gets a bit giddy towards the end of the day.

I think this child can count himself fortunate. How many of our little boys up north know much about what their fathers do for a living? How many are learning to use their hands? How many are accepted and are able to be comfortable with the older generation of men? In a few years he will become one of them and he will have had good teachers.