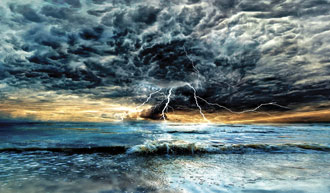 The entire world is in turmoil. We all watched as some strange virus began felling people in China. We watched as it began invading one country after another. And in early January, we heard rumors that the virus would come to the Western continents. But it was just another bullet in an unrelenting barrage of political “news.” While we all had the notice in plenty of time, some countries chose to ignore the early warnings. And then, what seemed like a punch in the face, we were surrounded. Our lives seemed to stop as abruptly as a car hitting a brick wall. Every country was trying to flatten the curve. For many, the answer was to make people stay home. Close businesses. And suddenly schools were closed. Still, most of us were in denial as to the force, depth and breadth of this devilish virus we now know as COVID-19. We learned as information became available bit by bit. The talk was all about what symptoms to watch for. Naively, we thought about two weeks in lockdown and everything would go back to normal. But as time moved on, we found more symptoms, and more problems, and more death. And the lockdowns lengthened.

It’s now July, nearly eight months since the first case was diagnosed. Some countries have opened, only to close again. Other countries have tried a “slow open.” Meanwhile, our citizens were losing jobs and many didn’t know where their next meal would be found. Everyone seemed to disagree on the proper way to proceed. Often, frustration got the better of us and finger-pointing and blaming, in both Mexico and the USA, sidelined the more important issue: how to maximize our safety. In times of crisis—and this has become the biggest crisis since the 1918 flu pandemic—people naturally look to their governments for solid, strong leadership. And Mexico and the USA’s leaders have been all but absent.

Without definitive guidelines, people were in the position of trying to make their own decisions based on differing versions of alternatives. Personally, I commend the governor of Jalisco as he watches, and has been cautious.

We all knew that we could go to get groceries, go to pharmacies, and doctors. We knew we needed to wear masks, to wash our hands frequently and use disinfectants, and to keep a safe distance from each other in an attempt to keep the virus at bay. While promises of a vaccine would be available “soon.”

Some people in the USA felt that their rights were being trampled on. They were angry and began going out without masks and banded together to demonstrate. Wearing a mask is to protect others from you if you are a carrier. How does this violate your rights?

The president tried to reassure the nation with information that wasn’t exactly scientifically sound.

Then suddenly, a video went viral. In Minneapolis, MN, George Floyd was being arrested for a minor infraction—possibly passing a counterfeit $20 bill. We watched in horror at the brutality of the arrest: Mr. Floyd pinned facedown by an officer’s knee on his neck as he begged for breath. Eight minutes and 46 seconds later George Floyd was dead. The spark had been lit.

People are scared. And when they are scared, fear can manifest as anger. When a population feels they’ve lost control of their lives, their health, their livelihood, even their safety, reaction is inevitable. And thus the perfect storm gave birth to demonstrations all over the world and galvanized protesters against police brutality towards nonwhites. Even in our tiny neighbor Ixtlahuacan de Membrillos where a Mexican man also died in custody. The demonstrations started out peacefully, but they didn’t stay that way. Buildings were burned, stores looted. Again, fingers were pointed, mostly along political divides. It has been established that the bulk of the damage at night was from different groups with different agendas trying to ramp up the violence for their own purposes.

The demonstrations have eased, but the internal fires still rage. Our citizens want control of their lives back. But the problem is time. It will take time to find a vaccine. Vaccines are never 100% effective. And because the world isn’t working together on a vaccine, availability may be an issue. It will also take time to work on problems in policing because change comes slowly, and racism is deeply entrenched. Retraining will be involved.

We have become a very impatient citizenry. Therefore, I think 2020 will be forever known as “The Year of Living Dangerously” and when true change began.