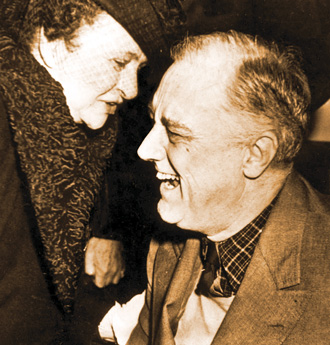 She was surely one of the most intriguing people in a century crammed with monumental personages, from Einstein to Ghandi, but her beginnings gave no hint of what was to come. From a lower middle-class family, her father owned and managed a very small book and stationary store in Boston, but was still able to send young Frances to college, where she earned a degree in Chemistry and Physics, two fields which would have little if anything to do with the national fame she would later win. What might have helped her in that regard, however, was her father’s love of Greek Literature and Philosophy, which he had passed on to young Frances.

Eventually settling in NYC, Frances would soon achieve statewide prominence as head of the New York Consumers League in 1910, fighting with vigor for better working hours and conditions. Earlier, she had witnessed a tragic factory fire, a pivotal event in her life. The factory employed hundreds of young women, but it lacked fire escapes. When the building caught fire, 146 women burned to death. Just a year before, many of these same women had fought for and won a 54-hour work week and other benefits that Perkins herself had championed.

In 1933, President Roosevelt nominated Perkins as Secretary of Labor, a nomination that the American Federation of Labor criticized because of her perceived lack of ties to Labor. But as Secretary, Perkins went on to hold the position for twelve years, longer than any other person. She was the first woman to hold that post in the United States and thus became the first female to ever be part of the presidential line of succession. More importantly, with few exceptions, President Roosevelt consistently supported her goals and programs.

As Secretary of Labor, Perkins played a key role in the Cabinet by writing New Deal legislation, including the minimum-wage laws. Her most important contribution, however, came in 1934 when as Chairwoman of the President’s Committee on Economic Security she personally drafted the Social Security Act of 1935.

Perkins would have been famous simply for being the first woman cabinet member, but her legacy also stems from her being largely responsible for the U.S. adoption of Social Security, Unemployment Insurance, federal laws regulating child labor, and the adoption of the Federal Minimum Wage.

In 1982, Perkins was inducted into the National Women’s Hall of Fame. Her reputation still lives on, as just this year, presidential contender Elizabeth Warren gave a speech using a podium, (as she pointed out) which had been built with wood once salvaged from the home of the “great and unforgettable Frances Perkins.”

Postscript: In those dark and deeply troubled early years of the Great Depression, FDR had formed a Cabinet that many historians today regard as one of the finest ever assembled. But they were, by all accounts, a dour lot. The only one (so the story goes) who could always humorously lift FDR’s spirits (a much needed service back then) was his Secretary of Labor . . . Frances Perkins!