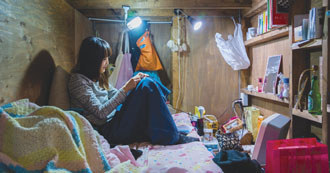 I’ve lived next to this family for a little over a year. A husband, wife, and three kids. We shared the back yard, and often saw the children outside on the monkey bars, the trampoline, and kicking the soccer ball about. Their house was walled off, so I never saw the inside…until they moved out.

I took a tour of the home, and became despondent. The house is very small. There is one bedroom. And there is a wide area that served as the kitchen, living room, as well as a sleeping area I assume for the oldest son, as he was the tallest. The furnishings were mostly still there, one dresser that served as storage for their clothes and an entertainment center, a cot, a matrimonial bed stand, one closet, and a book shelf. The bathroom had no shower head, no toilet seat. The kitchen had a small oven/stove, and a small hotel-room sized refrigerator. There is electricity, and gas. But there is very little natural light. And no real yard.

A lot of repair work, cleaning and painting could turn this small house into a nice small casita for one person or maybe a couple. A very close couple. But I’ll never figure out how that family managed with five people.

And I know conditions are worse in other places. I could only hope that they moved on to better things, but I fear not as I heard he lost his job. It seemed as though the wife was supporting the family working two jobs. What now?

Mexican people are the most resilient people I have ever seen. I have watched them “make do” with so very little. I’ve seen homes with no walls, no windows, and dirt floors. The woman who helped me in our former home had a dirt floor. She was showing me a photo of a new wall they finished when I noticed the floors were dirt. She was so proud of the wall, and I had to turn my head to hide my tears. Yet she always had time for my problems.

I’ve never run across a Mexican who wasn’t willing to help even in small ways. I never worry about getting a flat tire. I’ve had them and there was always someone willing to help… even when my spare was flat, too. (Don’t ask.) I’ve fallen and there were always people there to help me get up and make sure I was OK. Our neighbors were always there to help out be it something small, or an emergency. Their families help each other unlike anything I have seen in the USA. And they seem to be happy.

Yes, I have run into some unhappy and bitter Mexicans. One was a young woman who had just been deported from the USA. She grew up there, and didn’t speak a word of Spanish. I think of her often and wonder how she made out. She was deported here, where she had no family and knew no one. I hope she became better acquainted with her Mexican heritage and found the help she needed.

I also ran into another man who had been deported. He was handing out cards and looking for work. We talked, he had a family, and he had no time to feel bitter, he had a family to support. I took a couple of cards to hand out for him.

Ever the optimist, I hope they run into each other and they can find what they are looking for. I’m a sucker for happy endings.