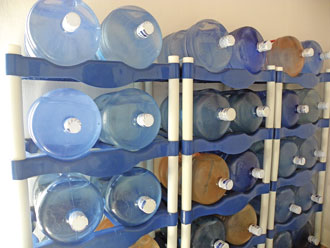 Tepehua Centro Comunitario is gearing up to expand a water program for people at risk for kidney disease in Tepehua, and if possible other barrios where kidney problems are prevalent among residents.  Pundits have pondered about cause and cure, even scientific facts have differed depending which report you read.

Every day we are naturally exposed to arsenic. Low toxic forms are in animals, soils, plants and fruit. If you follow the food chain, the plant grows in soil, the cow eats plant, and the person eats cow. The same with sea food, especially bottom feeders, they contain low levels of toxic arsenic. Ingestion is the main source of arsenic in the body naturally.

Arsenic does not necessarily build up in the body and can leave the body in one or two days ONCE INGESTION HAS STOPPED.

Inorganic arsenic, known as human carcinogen, is found in wells contaminated by volcanic rock, and other contaminants such as run off pesticides or human and animal waste. If consumed every day, it will build up in the brain, bones and other organs of the body, such as the liver and kidneys. So if low toxic arsenic is consumed every day, there will be health problems due to a gradual build up. Regardless of the level of arsenic, pregnant and lactating women are at high risk, especially the baby who might be born with damaged kidneys and prone to kidney disease.

Urine tests cannot detect advanced kidney problems, but can detect if there is a problem that calls for further sophisticated testing.

Between Mexico and North of the border, the safety level of arsenic varies between 10 ppb and 24 ppb. The ideal level is suggested at 3 ppb. There is no cure for this until the drinking wells are replaced. They should be moved from the bottom of the hills to the top. City wells need to be treated/cleaned every few months; a ceiling put on the price of milk and bottled water to stop the giants taking the public to the cleaners. Otherwise all the work organizations do to stop the poor from early deaths and unexplained illnesses is a non-sustainable band-aid. Educating families of the dangers of sodas and colas of any kind has started, but again it takes time that the poor do not have.

But we do it.  A pick-up truck has just been donated to the Center, courtesy of San Luis Obisbo Rotary Club in California.  With this little gem the Center can distribute clean water to those at high risk in the village. More help has arrived in the form of a donation of potable water from the Rotary Club in Seguin, Texas which will be distributed, buying time to find a solution to the known cause of the problem. Finding that, in itself, is the cure.