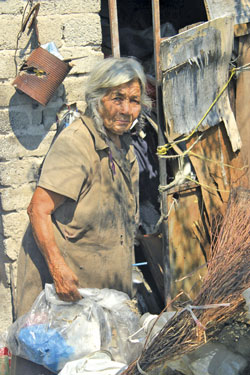 Religion and self-medication walk with poverty through the streets of the barrios. There is comfort and danger in both.

Religion gives hope where there is despair. It brings a comfort zone that someone is watching over which also brings a false security and people tend to “leave it to God” as he will take care of their problems for them.  It brings apathy, taking away the determination to fight the situation and even the playing field through self-action. Studies have shown that in countries that are fighting poverty, religious activity is more pronounced, regardless of the religion, be it Christian, Buddhist or Muslim etc. That comfort zone is undeniably needed, it fills the void and brings a troubled peace. An example of over dependency on religion is that of Mother Teresa. Her beautiful soul brought comfort to millions in places where death was the only future. She brought comfort and the promise of Heaven, she also raised millions of dollars.  Instead of using it for the benefit of the people she served, it was sent to the Vatican to distribute. A statement that was attributed to her was “God knew what he was doing when he created the poor” or words to that effect. Those who suffered in this life are rewarded afterwards.

What has self-medication got to do with Religion?  Dependency.  There are many over-the-counter drugs that the poor use to self-medicate. This is especially abused by women who self-medicate but also medicate their children.  When it is a choice between a visit to the doctor or food on the table, there is no choice.  When there is a choice between food or education, there is no choice.  Confusion from lack of education is also a close friend of poverty; it tends to get people to rely on the information of friends, and witch doctors of the modern world and self-proclaimed healers selling herbal potions that do not work.

Most ailments are accompanied by pain or discomfort, and opioids are a common prescription, not only by the cheap street vendors and over the counter, but also by doctors. So leaving it to God and dulling the pain are the same dependency.

The Tepehua Community Center is aiming at education in the barrios, and it is slowly releasing the inhabitants from total dependency to self-help through education.  There are many organizations doing the same thing and it is working. The even bigger light is the fact that organizations are realizing working together brings more muscle to the cause and there is definitely strength in numbers. Education is not meant as a weapon to ween people away from either religion or self-medication, which sensibly used are the prerogative of an independent mind. The comfort provided by belief in God and the choice of self-healing can still be a great part of  survival, but it is education that gives the key to knowledge which allows educated choices.

Statistics show that more women are avid followers of their chosen religion than men, except in the Muslim world. Statistics also show that there are more men addicts to opioids than women, but women can become more dependent more quickly than men. Across the globe women and children are more deeply affected by poverty than men, so yes indeed, the “face of poverty is a woman’s”.