Emergency at the Border? 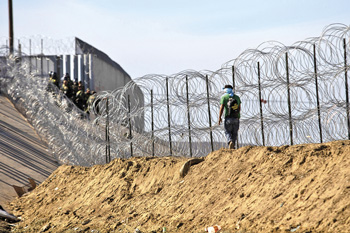 “I will build a great, great wall on our southern border. And I will have Mexico pay for that wall.” – Donald J. Trump

Trump intends to ride the Mexican border all the way to the next election. He claims rapists and criminals are pouring across. He says it’s a national emergency, so he sent in the troops. No knowledgeable person agrees with Trump’s “emergency.” Also, it’s illegal for the military to enforce civilian law. This was established with the Posse Comitatus Act of 1878.

International and American law provides for the right of refugees to seek asylum. Yet, Trump calls them “illegals.” Trump threatens to send the asylum seekers to so-called sanctuary cities. He thinks this would be a punishment for those heretic cities. His threat, however, backfired, because several cities say the asylum seekers would be welcome. The contrast exposes Trump’s soiled soul.

Trump has boasted that his wall will be built “ahead of schedule.” Several obstacles make his pronouncement a blast of hot air. Two-thirds of borderland property belongs to an Indian tribe or to private individuals.

The border in Arizona passes through the Tohono O’odham Nation. They are about the size of Connecticut. For them, the border does not exist and they cross back and forth, since their lands are on both sides of the border. They have been there since ancient times.

They say, “Our land didn’t cross the border; the border crossed our land.” That was the result of the spoils of conquest that compelled Mexico’s agreement to a border that crossed through the Indian nation.

In 2007, the Tohono O’odham Nation agreed to allow the placement of spaced concrete posts to block vehicles, but not to restrict the flow of people and animals. The George W. Bush administration proceeded to desecrate Indian burial grounds and to dig up human remains. The Indians now vow to fight Trump’s wall. Trump will need a stand-alone bill from Congress to condemn their tribal land. Democrats will not allow that to happen.

The Constitution provides for just compensation that can only be determined in court when the landowner refuses to sell. Some of these cases can take seven years to resolve. Trump will be out of office before these cases of eminent domain are settled.

A 1970 treaty is another obstacle for Trump. It requires that the flood plain of the Rio Grande River remain open to both sides of the border. The swath of the river’s floods would require the barrier to be placed well away from the river into the United States. A wall would cross farming land. There would have to be openings in the wall to allow access for irrigation. So many openings to the Rio Grande would render any wall useless.

A border fence catches debris during flooding and becomes a dam. It prevents the water from going to the American side. As a result, the floodwater goes to the Mexican side and floods their buildings, in some places with as much as six feet of water.

Geology presents a problem of prohibitive expense. A thousand miles of wall will traverse a wide variety of soils. In some cases, sediment is thousands of feet deep, making a secure foundation both difficult and expensive. Crossing the steep mountains is another problem. Some stretches are shifting sand dunes. The dunes can bury a wall in a short time. A wall has to float on the dunes and be lifted up every time it is buried. But there are areas of clay that act like a sponge.

When the clay freezes, the clay heaves up, cracking the foundation and the wall. As if that’s not enough, there are stretches in the Trans-Pecos region that are rich in sulfates that quickly corrode both concrete and rebar.

Trump the huckster claims that the wall will prevent illegal crossings.

But border barriers don’t work for a variety of reasons, which is a topic in itself. Many Border Patrol officers oppose a solid wall and prefer a fence, because they have the advantage of seeing what’s happening on the other side. A wall slows down agents as much as it does migrants and provides no advantage to the Border Patrol.

Until the first fence was built in 1990, workers could circulate easily across the border, coming to harvest crops during the summer and then returning home in the winter. Border assessment should include the number of migrant workers returning to Mexico.

The result of such a calculation is that the total number of unauthorized immigrants remained at about 3 million. And their labor was much needed. With increased border security, those immigrants who make it across tend to stay in the United States – rather than risk going back to Mexico and not being able to get back to the States. This drives the population of illegal immigrants in the U.S. up to about 12 million. A wall is counter-productive.

Increased border security also invites the Grim Reaper. The part of the border least guarded runs through the Arizona desert. Undocumented immigrants are driven by desperation and hope to this route, with no idea of the dangers ahead. They become disoriented, dehydrated, and die in dreadful numbers.

Since 1999, at least 7,209 people have died in the Arizona desert, according to NPR. Arizona maintains a morgue dedicated to receiving the remains of such immigrants, often only bones.

American farmers, construction companies, and restaurants need Mexican workers and Mexican workers need to work. Indeed, at one time, the U.S. even set up recruitment offices in Mexico to sign up workers, who then came by train to the U.S. by the thousands. We once had a Bracero program that allowed Mexican workers to enter the U.S. legally.

Trump’s big beautiful wall will not be built ahead of schedule. Indeed, it will not be built at all. Treaties with both the Tonoho O’odham Nation and Mexico cannot be tossed out. There will be years of legal fights with landowners. The geology along the course of the wall will take many years to survey and surmount, and take more of the budget than Congress and taxpayers are willing to allow.

Trump’s national emergency at the border will have to remain in the land of paranoid fantasy.