The Wit and Wisdom of George S. Kaufman 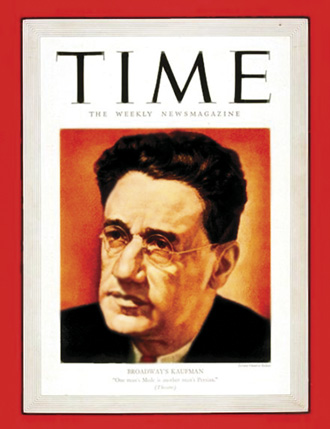 If 19th century Americans had voted for the person most deserving in this W&W category, it surely would have been Mark Twain. Here, we make the case for a 20th century American who might have later won in that same exalted category.

Over the course of a long career, Kaufman was a newspaperman, drama critic, playwright, stage and film director and the leader of a group of similarly-quick-witted famous people who met regularly in the 1920’s at the Algonquin Hotel in downtown Manhattan, gathered around what is now the legendary “Algonquin Round Table.”

Starting at a very young age, Kaufman was given a column at the Washington Times and started jabbing at the Establishment, quickly alerting his readers that he soon would be a force with which to reckon. Of the U.S. Senate: “Office hours are 12 to 1, with an hour off for lunch.” On Big Oil: “Has anybody ever called it the Slandered Oil Company? Because it isn’t.” Needless to say, he had a knack for choosing subjects that deserved deflation. Next stop (obviously): the New York Herald Tribune and soon thereafter the New York Times, then as now, the most influential newspaper in the United States.

While still in his mid-20’s, Kaufman was made Drama Editor for the Times, a job he had been born to hold, and this at a time when the American Theater was about to burst wide open with both quality as well as quantity: playwrights like Eugene O’Neill, Clifford Odets, Sidney Howard, Maxwell Anderson and George M. Cohan, performers such as Will Rogers, Katherine Cornell, Helen Hayes, Al Jolson, the Barrymores, Alfred Lunt, Lynn Fontanne and Fred Astaire.

Yet Kaufman, young as he was, quickly earned their respect while also proving that despite his age, he was not easy to push around: when a well-known, high-powered press agent demanded an answer as to how he could get his actress/ client more publicity in the Times, Kaufman’s answer was quick: “Try shooting her.”

Before his legendary career came to an end, Kaufman had co-written 32 Broadway plays and directed 31 of them (many written by other playwrights), as well as having directed the Marx Brothers film, Coconuts, today considered the most outrageously funny movie ever made. Among the plays that he directed were such major hits as Guys and Dolls, Of Mice and Men, The Front Page and Once in a Lifetime. Among his many awards were the Pulitzer Prize and the New York Drama Critics Award.

But it was Kaufman’s devastating wit that is best remembered today, a talent that would have made him memorable had he never been anything more that a cab driver in Manhattan—a type, incidentally, that he disliked almost as much as he did the snooty waiters in fancy restaurants. On hearing of the death of a surly waiter whose attention Kaufman had rarely been able to attract, he said, “Well, it took God himself to finally catch his eye.”

To a rival playwright: “I understand your new play is filled with single entrendres.”

On receiving a phone call during his dinner from someone asking what Kaufman might be doing for dinner that same night, he simply said “Digesting it” and hung up.

Lunching with Harpo Marx (who could talk!) at a fancy restaurant, Marx, stunned by the prices on the menu, asked what he could buy for fifty cents. Kaufman replied: “A quarter.”

A self-made millionaire once bragged to Kaufman that he had come into the world without a single penny, to which Kaufman replied: “Think that’s tough? When I was born, I already owed twelve dollars.”

Rather aghast at the spending habits and lack of taste of some of his well-heeled friends, Kaufman remarked to one of them, “This kind of stuff you buy is what God himself would not have bought, even if He had possessed the money.” To this same man, he said, “I like to be near you. It comes under the heading of gelt by association.”

Ordinarily, men of such wit are compulsive talkers; Kaufman could sit silent for an entire evening while dining with his illustrious friends, and only mutter a few words as he was leaving. Invariably, they were the wisest, wittiest words said over the course of the entire night. Another anomaly: despite his often biting wit, he was at heart a sentimental man who could be brought to tears by some of the hard-luck stories he would occasionally hear. It was those two sides of his nature that had helped make him such a compelling dramatist. Is it likely that the American Theater will any time soon again see the likes of a George S. Kaufman?

Don’t bet any serious money on it.