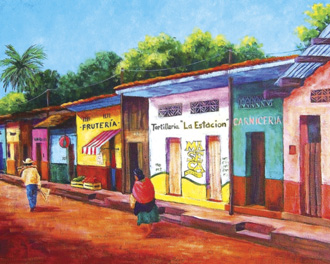 There’s a joke Mexicans like to tell on themselves. It seems that when God was putting together their country, He invited several prestigious people from other lands to watch the process. Almost immediately, they commenced to complain.

“Dear Lord, no disrespect intended, but is it equitable for you to bless this new country with so many beautiful vistas?” said one man, whose own country resembled a pile of rocks.

Another man heatedly observed, “And look at all the mineral resources you´re putting under the ground—far more than all the countries in my region of the world combined!”

“And the weather!” groused another observer from a nation that was a blast furnace in summer, a refrigerator in winter. “Lovely almost all year long!” “And those gorgeous beaches and natural harbors,” bitched a man from a land-locked country “Well, forgive me, God, but it just isn´t fair!”

Pausing in his labors, God smiled and said, “But what you don´t realize is that my last act of creation here in Mexico will still make things rather difficult for the people of this new country.”

The observers´ voices rose as one. “But dear Lord, how can you do that?”

“That’s simple,” God said, chuckling “I will give the country of Mexico its politicians.”

God has, of course, “blessed” many other countries in a similar way but a true gift He did bestow on Mexico is probably the reason most foreigners come and later stay in this land. Some cite the weather, lower cost of living, the culture or the spectacular vistas . . . but everyone agrees that the best thing about Mexico is its people.

We all have at least one experience that demonstrates this. I have many, but a single story will suffice for now. Many years ago, deciding to finally move to my mother’s homeland, I drove some three thousand miles through Mexico in search of the perfect place to settle. Toward the end of that long trip, I was returning from the coast one Sunday morning during the Christmas season, driving toward Guadalajara.

But going through a village, I hit a tope (surely one of the worst things about Mexico) going way too fast. Something snapped in the undercarriage of my car; suddenly it was listing like a sailboat in a storm.

My car was a British-made sedan, a make not then serviced in Mexico. Parts would be difficult if not impossible to find, even in a major city. And it was a Sunday, in the middle of a village.

I was stewing in my dilemma when along came an old man and a boy on a bicycle. I hailed them and explained the situation, though of course it was obvious to anyone but a blind person. The old man asked if he could be of some help.

Getting a mechanic was the first priority. But on a Sunday, his garage was probably closed. “No problema,” the old man said, as he dispatched the boy to the local church. The mechanic would be attending Mass. Sure enough, fifteen minutes later, here he came to inspect the damage. A linch pin in the car’s rear aft shock had sheared off. Did the mechanic know where I might get one of the same size?

No, but possibly any pin of approximate size might do, since the weight of the car would not allow it to fall out. However, the hardware store was closed. Then the boy piped up that he knew where the owner usually had breakfast on Sunday mornings—and off he pedaled in the direction of a roadside restaurant.

Within half an hour, the store owner had reviewed the situation and was back with a steel pin of about half an inch thick and some six inches long. By now a crowd had gathered, and as several of the men hoisted up the rear of my machine, the mechanic, now flat on the ground, kept saying mas alto or mas abajo until the holes were in alignment and then slipped the pin into the right place. Presto! My car was back up on all four of its legs. The crowd applauded.

Never having been especially adroit when confronted with any problem involving a car, I was still somewhat in a state of befuddlement. I was, however, conscious enough to know the debt I owned these people. But when I tried to pass some pesos around, the offer was politely rejected.

Turning to the old man, I asked if there wasn´t something I could do to show my appreciation? He flashed a toothless smile and shook his head. Then the boy stepped forward to quietly suggest that I might want to buy everyone a soft drink. Was he kidding? Had I the money, I would have gladly bought them all a few shares in Coca Cola!

The years have misted over the memory of that Sunday morning, and I no longer can recall the name of the village. But I still remember that what seemed like a fair portion of its inhabitants were waving goodbye as I pulled away. It was an experience I obviously have never forgotten.