“No painting or drawing, however naturalist, belongs to its

subject in the way that a photograph does.”

Solo exhibitions are always a time of reflection for an artist, a bringing together the gifts she or he has created, especially so for Chapala artist Yazkara Godinez, whose keen eye and ability to discern the nuances of human moods which define her works. This collection of photos, the strength of her images, confirm this artist’s subjective, biased, and creative interpretation of her chosen subjects, a positive bias because the result, as in all fine arts, is dependant on an artist’s unique background, understandings, and creative vision.

Photographers have a distinct set of skills - today expanded by digital images which can be creatively modified in a variety of ways to strengthen the impact on viewers. Recently Yazkara participated in a course in Guadalajara taught by Costa Rican photographer Eloy Mora, who, in turn, was a student of Eugenio Recuenco, a distinguished photographer from Spain. Their collective focus was on light and group photos which partially or wholly recreate scenes from human history, such as the Last Supper or the Death of Marat. Their positive influence expanded Yazkara’s visual vocabulary by adding the element of light from multiple sources, which causes a sharply focused, psychological result. (see link)

The transition from chemical (scientific) photographs first developed in the 1800s, to digital images, has radically changed the possibilities open to the creative photographer, enabling them to fine tune their interpretation of subjects. Artists Alfred Stieglitz (1864-1946), Edward Steichen (1879 - 1973), and Andy Warhol (1928 - 1987), who focused on aesthetic results, each designed to shock the viewer by transforming a photo from an image of perceived reality into significant works of fine art, which results, in part, from the separation of technical and intuitive aspects of a photo where such fineness is most dependant on intuition, sight, and insight.

These qualities are apparent in Yazkara’s capacity to capture melancholy, and more subjective moods, mirrored by human reactions to reality, which become visual footnotes pointing to breakthrough photographic works created by Helmut Herzfelde (1891 - 1968), Hanna Hoch (1889 - 1979) and Max Ernst (1891-1976), who added psychological and surreal elements to heighten the impact of the images they created, thus confirming their status as fine art.

Her photograph of Obscure (a young woman), with elements of dress from a Shakespearean play, captures the deep reflective state that has washed over this subject. (photo 1) The intensity of her melancholic mood captures our full attention. The girl is both known and unknown in the same moment. Her mental distance - the unknown quality - is at the core of the success of this work. The composition is solid and simple, keeping attention on the core mood expressed. 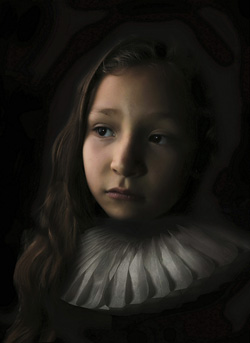 More complex in construction, but with equal impact, her photo Damian conveys a complex sensuality, where we are seeing his face in a place absent from time, an image of his consciousness captured apart from his physical manifestation. (photo 2) Perhaps this Damian (Greek word to tame or heal) is the Christian physician who was martyred with his twin brother Cosmo in fourth century Syria, who is considered the Saint of Physicians in the Roman Catholic Church. The fractured surface of the photo adds texture and richness to the image, and imparts a visceral sense of mystery, notes of visual magic that hold viewers attention and invites our creative speculation as to the meaning of the work. 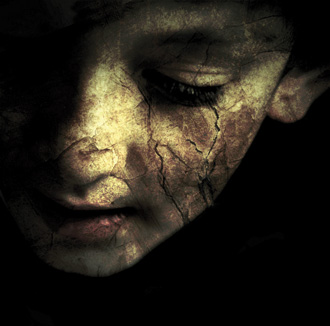 Art Critic, Clement Greenberg, observed, “Photography is the most transparent of the art mediums devised or discovered by humanity - which is why it proves so difficult to make a photograph that transcends its almost inevitable function as a document, then become Fine Art.” Yazkara’s photographic art does just that.

Yazkara Godinez’s one woman exhibition opens with a public reception beginning at 7 PM on September 22, 2018 in the Centro Cultural Presidencia Antigua in Chapala, Jalisco, Mexico. All are invited.

Ed. Note: With this issue, Focus on Art comes to the end of a 12-year run, during which Rob has done much to create understanding and appreciation of Lakeside’s many artists and artisans. They owe him a great debt of gratitude, as does this magazine. Luckily, Rob will continue to contribute to our pages with articles about anything that just happens to catch his fancy.