There is something rotten in Helsinki 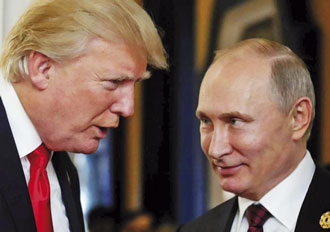 Borrowing from Shakespeare’s Hamlet (who and what better to cadge from?), the reviews are in regarding President Trump’s recent performance in Moscow and they are devastating, many coming from members of his own political party, to wit:

Sen. John McCain, (R): “No American president has ever debased himself more abjectly before a tyrant.”

William Brennan (R) and former head of the CIA: “Nothing short of treason.”

Senator Bill Flake (R): “Never thought I would see an American president place Russian interests over those of his own country. Shameful.”

Rep. Paul Ryan (R) Speaker of the House: “Russia did interfere with our election and continues to undermine democracies all over the world.”

James Comey (R) Former Head of the FBI: “Trump refusing to stand up to a murderous, lying thug and not back up his own country is a national disgrace.”

On the general subject of weakness, and despite the ton of evidence from virtually every single American intelligence agency regarding the massive (and continuing) Russian conspiracy to undermine elections in the Unites States and thus pervert one of its most important democratic pillars, President Trump did finally muster the courage to timidly ask Putin if he had anything to do with such an effort, to which Putin answered “No” —and for the President that settled the matter!

General Consensus: No foreign treaty, understanding or agreement is worth throwing America and its people under the bus.

Prior to meeting with Putin in Helsinki, President Trump had earlier attended a NATO meeting where he claimed that the US of A was paying some 90% of the bill that kept the organization going. The truth: it was more like 20%. His presence at the conference was riddled with such exaggerations and only created discord in the organization that since World War II has been the Allies’ bulwark against Russian aggression. In England, he trashed its Prime Minister and extolled the virtues of her main political adversary.

Trump had earlier complained at the G-7 meeting in Canada that Russia should not have been kicked out, and should be immediately re-instated. He seemed not to realize that Russia had been kicked out for the very good reason that it had annexed Crimea and was occupying the northern part of the Ukraine.

Given all of the above, one must ask: why is President Trump playing the puppet for Putin, even while trashing America’s long-standing allies and trading partners all over the world? How can he make jokes about Russia’s hacking of our political system “I think it was a 400-pound guy in a basement somewhere who did the hacking.” To do so is nothing less than license Putin to continue the perversion of America’s political system. Already American intelligence has detected that Russia is gearing up for the U.S. mid-term elections.

I suggest that there can only be two motives: Either Russia has shameful and career-ending material (video tape?) of Trump’s personal behavior during the last time he was in Moscow (e.g., the Steele Dossier) as a private citizen, or since Russia clearly favors him, he has decided to simply “overlook” the subversion. He has occasionally said that he envies dictators which remain in office for “life” and perhaps that is exactly what he has in mind.