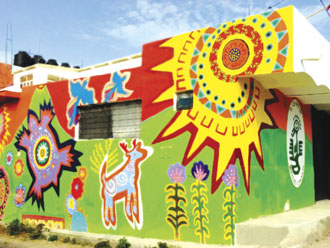 Websters Dictionary offers a wide variety of what “family” means. One being the mating of two same species and raising offspring. Mobs have ‘families’ as do cults and organizations. The Tepehua Community Center Organization considers itself a ‘family’ that houses many ‘families’.  Those families we hold sacred and do everything in our power to keep family together. Once a family is split so is their strength. In its eight years the center reported only one single Mother to authorities to take her children away, it wasn’t because of abuse, it was child neglect (although a form of abuse, these children were like wild, happy, uneducated dirty puppies). A year down the road we can report it was good for all concerned, but never the less...taking away her children broke that young Mothers heart. Having never been to school she found it hard to figure out what went wrong or the danger she was exposing her children to.  She has never stopped fighting to get her children back, even though they are prospering without her. She too is better for it, she has something to straighten up for, a reason to change the dysfunction that was her life. She had visiting rights everyday...but not allowed to take them out. Monies that come into the Tepehua Treasures Consignment store, Riberas, helps support keeping families together, through counseling, education, building up the esteem of family members, job training and independence. Building strength and respect in the family unit. Forced separation of children from parents creates an anxiety like no other, and unless the children face immediate danger from being with their parents...it should never happen.

In WW2, when the Germans were bombing all London and suburb schools in an attempt to kill the next generation,  Government decided to ‘save the children’ , taking them away from their families, and putting them on the infamous train to destinations unknown in the North. It was called Operation Pied Piper  (remember him? he was asked by the people of Hamelin, Germany, to pipe the rats out of their town, when he did they refused payment, in spite he piped all the children out as well). Three million people were moved in 4 days (and me)  from London and surrounding suburbs. I was about 5  years old, my sister was around 7, we huddled on the train, our first time out of our street.  I have never forgotten the look on my Mothers ashen face as we left. We arrived at the train station North and they lined us up, ( every station in the North was like a warehouse for children, we were spread everywhere, some were even shipped to Australia, New Zealand and other British colonies), and people came and picked out the child they would accept in their home (had we been black it would have been like an auction). All we could remember of that time were the words “I’ll take that one”. We were traumatized, dirty, tired and hungry, we all had a little box with a change of clothes, a gas mask, a name tag pinned to our chest or looped around our neck. It was months before our Mother knew where we were. Fortunately my sister and I were chosen together. Being almost the last left on the platform...nobody really wanted one, let alone two.  The abuse some of the children endured will go down in infamy. Those families didn’t want “refugee’s”, it was a Government decree they had to take us in. We never learn from history, what is happening on the American Southern Border is the same madness that happened nearly 80 years ago in London England, and in Europe. The Mothers and children traumatized for life. The majority of the people trying for asylum in the USA are not Mexican Nationals, but they are Mothers trying to take their children to safety from assorted South America’s at Civil war and drug cartels....of course there are a few bad apples in the crate, that is what ‘DUE PROCESS’ is for, to sort them out. Do not separate children from Mothers  until there is “JUST CAUSE”.

Those who remember those atrocities of separation in the past should speak out now...lest we forget. America was a great country built on the shoulders of immigrants after WW1 and 2,...as was Australia, New Zealand. Migration is as old as the first primates. All looking for a better place.

Some small countries have over burdened themselves from their compassion and taken in more immigrants than they can handle all at once.  Days gone by immigrants came in hand fulls...not boat loads and in their thousands at a time.

Like the mystery of the Universe, we haven’t found the right answer yet,  but the way we are handling immigrants world wide is not the solution.

We have reached zero tolerance, against poverty, corruption, big company greed, mans inhumanity to man, all over the world.  We are our brother’s keeper.