“If you are afraid to speak up, put a mask on. You won’t believe what comes out your mouth.”     Guerrilla Girls

Typical of street artists, Guerrilla Girls are women graffitiest who hide their identity by wearing gorilla masks - whose clandestine street messages protest cultural inequality, while their unity creates a challenging mirror image of male power groups in the art and political worlds.

What began as a plea for recognition by marginalized people throughout the world as graffiti - consisting of their street pseudonym and poignant words painted with bright colors and stylized calligraphy on trains and buildings worldwide, markings that were significant expressions of their disdain for the establishment - over time became today’s wild, creative Street Art.

While still seen as vandalism, street art has become an open forum unrestrained by commercial requirements placed on institutional arts enslaved within capitalism - an art form where the limits of creativity are nightly tested by waves of young artists seeking proactive change in rigid cultures and societies that eschews basic needs of humanity.

Motivated by their lack of access to wealth, power, and voice from within disenfranchised communities, street artists reach out with their painted messages to alter social structures, liberate marginalized communities, preserve the environment, and gain benefits that will enable humans to live with dignity and meaningful presence. They want, Kafka suggested, “...to squeeze through an opening and ask - what do I want to be?” and gain freedom from control by corrupt, non-functional governments, corporate domination, and cultural greed and injustice practiced by obdurate capitalist.

Street artists frequently work in small groups and hide their identity with anonyms which enable profound change in how they perceive themselves. Swoxe, for example, is the street tag for the young Chapala artist this article focuses on - a young man who, in community with other artists, has gained self-respect, companionship, and peer approval, qualities once denied to him by society. 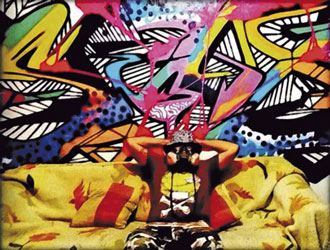 Swoxe’s painting on the wall of a local barber shop began as graffiti featuring his name, but - through masterful calligraphy, executed with dynamic forms, bold colors, and rich texture and pattern - enters the realm of ‘fine art.’ In (Photo one) a satisfied Swoxe sits, masked, in front of his transformed graffiti. While calligraphy remains central, his use of harmonized colors which  move through and into and out of the picture plane, coupled with his variable use of line and dot patterns, create an emotionally explosive artwork.

Swoxe’s wall painting of an anthropomorphic, half human and half elephant, Ganesha, Hindu  god of beginnings, intelligence, wisdom, and creativity - an image taken from Indian mythology which stuns viewers (700 BCE), and with refined detail, sensuous color, delicate pattern, and sophisticated integration fashions a unique world where trees of life grow outward from Ganesha with their beautifully curved branches surrounding rich tapestry created by Swoxe’s practiced calligraphy. Shot at night, his work glows with beauty and spiritual life.    (Photo 2) 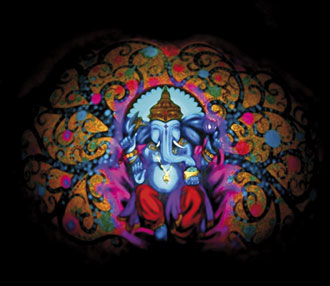 This transformation in Swoxe’s approach is reminiscent of New Yorker, Jean Michel Basquiat’s (1960 -1988) move from biting graffiti artist, Samo, his street tag, to internationally acclaimed artist whose painting Untitled sold for $110,000,000 dollars - a dream that must tempt new generations of street artists who, unpaid, place their visual messages in the public arena accessible to all who choose to notice. While Swoxe’s future is yet to be determined, humanity’s future is being shaped in the streets. Street art painted on private and public property as both spontaneous gift and challenge to existing culture and society has become a powerful change agent, and major movement, within the world of art.

“If we wash our hands of the conflict between the powerful and the powerless, we side with the powerful.”         —Whitewalls

* Swoxe’s paintings - created in community with other artists - may be seen in Ajijic on the Malecon, and on a bar on Constitution, in Chapala upon the stairway up the mountain, on Juarez street behind Coppel, in San Antonio on wall of Ganesha Spa, and on various structures throughout the Lakeside community.