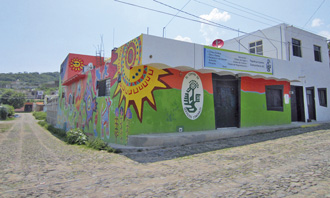 The Tepehua Centro Comunitario’s April Fools Party honoring the volunteers that have made Tepehua strong held at the Sunrise Restaurant in Riberas, was so diverse as village people and ticket holders joined together to celebrate the power of volunteerism.  Other Charities were represented - President of the Chapala Shriner’s David Eccles with a group; Rotary Ajijic; Cameron of the Spay and neuter program and Lucky Dog helped serve bar; Lake Side Assistance group; the LaZapotera Mayor with village people who are associated with the new Community Center of La Zapotera, which is almost at its completion and a sister Community Center to Tepehua, an experiment that clearly is heading for success under the guidance of Todd Stong and Harvey Bernier.

The local women of Tepehua were honored for their role, they have taken over the responsibilities of the center, and claimed it as their own.

The volunteers of Tepehua Treasures consignment store were heavily represented under the lead of Judi Vance, and acted as bar girls, serving drinks and keeping everyone happy with their antics, a unit of Volunteers that really are a very strong financial support for the Center’s education program.

Volunteering became strong in the first decades of the 1900’s. Organizations such as Rotary, Kiwanis and Lions Club were born according to Stephanie Rosenburg. Benjamin Franklin developed the first volunteer firehouse as far back as 1736, an idea that is now the American norm as 70% of firefighters are volunteers. Another great “War on Poverty” was started by Lyndon Johnson in 1964. Volunteering today has become a pastime of which the Internet has played a huge part connecting people with projects.

The Fools Day was topped off with an organization called “Fauna Silvestre Mexico”, a wild life rescue organization, who brought snakes, an owl, a hawk, an iguana and a few other species to join the party and have their picture taken by fascinated guests. Its mission is to help people lose their fear of the wild, and not destroy the species you find in your “space” uninvited. Remember, it was their “space” first. Should you have an uninvited guest, call Byrne at 331-020-2585, they will be happy to bring their rescue truck and remove the offending visitor.

To end an incredible coming together of Benefactors and beneficiaries, Big Al, the singing waiter of the Sunrise restaurant gave a heart-felt rendering of “I did it my way”.