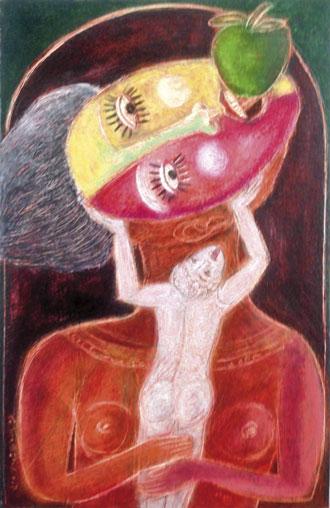 “Art enables us to find ourselves and lose ourselves at the same time.” --Thomas Merton

Art combines imagination, emotion, and reason - which, throughout, guides the educated and refined use of the materials and elements that physically give an art work form. Emotion, a key to all evocative art, lies beyond the realm of consciousness, yet, initially is the vaguest component, yet shakes the whole. Imagination is the entry into a dream state while awake. The three create a loosely organized framework that initially guides the creative process. Affect, present at the end of the process, enables a viewer’s aesthetic response, and engenders a fundamental desire of the psyche.

Gabriel Mariscal’s paintings engage as fables, organized with these three essential components, augmented with elements of our universal human disorientation which results when an artist or viewer is confronted with a world that is essentially open to question and perceived as both physical and spiritual in nature. His art integrates what happens both inside and outside of conscious intent, which propagates and enriches the psychological impact.

“Don’t become a recorder of facts, but penetrate the mystery of their

Gabriel’s juxtapositions of realities, symbols that evoke cultural memories, spiritual cues, and metaphorical references are psychological triggers, which together, spawn dream like places and times that move his paintings into the realm of the psyche. Various mixes of such triggers with imagination, and emotion, controlled by his mastery of the elements, creates a psychological environment that foment a viewer’s desire to unravel his fables.

In his painting, Eve and Apple (photo 1) the white fallen angel/devil, with symbolic extended tongue, twists Eve’s head up to the forbidden apple. The dark green background rests behind the maroon base, while the light green apple is set in front of everything, which causes an interesting push/pull through the surface. Her half red face and red body evoke human sexuality, and the gold, sun-touched side of her face symbolizes fallen purity. Harmony of color, rich symbolism, and dream like forms complete a tantalizing work of art.

His Felliniesque Clown (photo 2) combines sophisticated use of color, movement over the picture plane, and line quality, while the clown’s extended tongue and hand gestures create a visual message that intentionally affronts ‘cultured’ sensibilities. The powerful colors and bow tie consummate an ‘in your face event,’ influenced by Fellini’s cinematographic personality, dream-like narratives, framing, and themes of childlike play, pathos and desolation. Gabriel shared, “I am intrigued with Fellini - his films have enabled a deeper, more nuanced, understanding of what constitutes great art.” 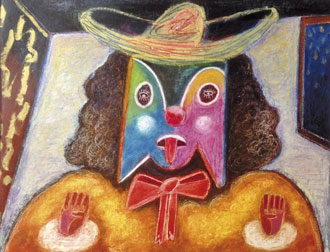 In all of his recent paintings Gabriel uses a technique rooted in ancient Greek and Egyptian encaustic portraits created with pigments dissolved in hot beeswax. Gabriel begins with a base coat of pre-colored encaustic made with a muted hue which facilitates harmony in the overall color scheme of the work. These colors and essential forms are applied with colored pencils and pigment filled oil sticks formed with a small amount of wax that stiffens the whole.

Gabriel uses these oil sticks, rather than brushes, as the primary medium. Texture and color mixing is created by scratching through the various levels of color with a stylus - evident in the hair of both Eve and the Clown. Gabriel’s informed use of color, symbolic language, and evocative forms, confirm his gifts, and importance in Mexican art.

“If there were a little more silence, if we all kept quiet...maybe we could understand something.” --Federico Fellini