Art’s Digital Transformation – Giclée and Beyond

“Our digital world is a populist force, leveling rich and poor, educated and uneducated.”

We live in a technical age when everything seems possible. A time when digital and 3D copies of original art from throughout history are accessible for everyone, a reality which creates many unresolved questions, for example, what constitutes an authentic work, semi-authentic, or a fake - an issue that has eternally plagued historians and collectors of art.

Romans copied Greek sculptures. Painters like Pieter Bruegel the Younger (1564 – 1637) made multiples of his own works and paintings done by his father. In the 20th Century creating fakes became a pathway to great wealth. Jean Francois Millet, a grandson of Millet, had Paul Cazot, a gifted artist, copy over 40 paintings and 200 drawings of his grandfather Millet, and sold them at great profit. Otto Wacker, in the 20th Century, painted thirty-three new Van Gogh’s which were considered originals for thirty-five years. Geert Jan Jansen (1945), “the most sophisticated forger ever,” copied and sold as originals works by Picasso, and Matisse. When one of his works was discovered to be a forgery, police raided his farm-studio and found over 1,600 fakes of modern masters. His gain was twelve million euros held in three Swiss accounts under assumed names.

Art historians argue original painting have an aura that reflects the time and space in which they were created, and a copy - human-made or mechanical - lacks the “sympathetic spiritual presence which emanates a call to contemplate, or be in relationship with unique works of art.” I believe authentic works are endowed with magical and supernatural forces arising from their singularity, and the qualities imparted by their creator, .

Throughout history copies have been made in a variety of ways. Artist use etchings to create original works, or copies of larger paintings, by drawing with etching needles which cut through a ground of wax or resin coating on a copper plate. Then the plate is dipped into acid which etches the exposed metal. The plate is inked and pressed to produce multiple copies. Durer, and later Rembrandt, Goya, and Manet, circulated their etchings to gain universal recognition.  (photo 1) 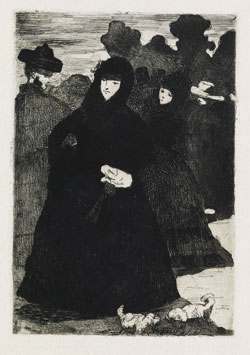 Lithography, painting on stone, is a planographic process where images are painted with greasy ink onto a stone plate pre-moistened with water which was then pressed against paper sheets. During the 1800’s full color originals or copies of authentic works were done by painting each color on a separate stone. Pins were used to line up each stone as it was pressed to ensure a perfect color print on paper or canvas. By 1890 this became a refined mechanical process using a zinc surface where color prints of great paintings could be produced and sold by entrepreneurs like Sears and Roebuck through their widely circulated catalog.

Jacques Villon (1875- 1963), with permission of the artist, used etchings and lithographs to produce portfolios containing a series of the best contemporary paintings by Matisse, Braque, Picasso and other leading artists. Rights to mass produce this series were sold to the Louvre Museum in Paris. Up until today, lithographs, etchings, silk screens, aquatints, mezzo-tints, hillotypes, choreographics, and a variety of other methods have been used to copy and create originals.

But the advent of Giclée - a digital copying process introduced by print-maker Jack Duganne in 1991- and recent 3D digital copiers which make exact scale copies of great paintings, - have unsought results, such as major museums exhibiting copies to protect the originals in cooled dark rooms.

“Art ultimately is the secretion of society, and conversely society mirrors the Arts.”

Is a Giclée as good as the originals? In photography the answer is often yes, but what of paintings? Art experts, historians, and critics say “no, the aura of the original is not replaceable,” yet for educational and personal pleasure Giclées or 3D digital copies have significant value. Quality hand-painted copies of original paintings, have more value because they develop their own aura. In Chapala, full-color Giclées (digital copies) of paintings and drawings, with permission of the artist, are made by and sold at The Art House. (photo 2) 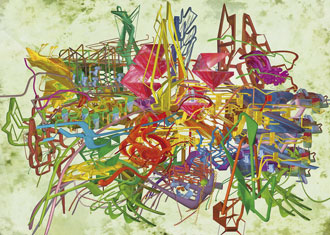 Might the magic and essence of a painting be lost when the copy is exact in three dimensions with texture, brush stroke and the attributes of paint present? Viewers alone may answer. For this writer, to sit before original work of art is, and always will be, a spiritual experience.