“O how can I with my gross tongue that cleaveth to the dust.

Tell of the Four-fold Man in starry numbers fitly order’d.”

Today’s commercial face of Christmas has lost sight of the myth of a virgin birth in Bethlehem. Yet the ancient story of Jesus’ birth and acclamation as king of the Jews by three oriental Magi remains accessible through great works of Renaissance art. paintings, which in the 15th century served as non-formal education, confirmation of the artist’s understandings and beliefs, and aesthetically pleasing places of worship which chronicled the history of Christianity. But under this formal surface lies a complex story of liminality and ritual.

To follow Christ requires a ritualistic liminal passage from materialistic, ego-eccentric life into one of compassionate care of others. Francis of Assisi was exemplary - he, like Jesus, focused on a simple, caring life. Christian rituals, in which art played a key role, were developed to enable women and men to access the Christian life chosen by Francis.

Many Christians have experienced ritual’s trans-formative power through communion, baptism, burial, and the rituals of Christmas. The process of liminal transformation is clearly portrayed in A Christmas Carol by Charles Dickens, where readers experience the passage of Scrooge from greed to compassion. These fundamental precepts confirm, for example, why support of would-be-king Trump is incompatible with following the mythic Jesus.

Renaissance artists, who were themselves Christian, understood their works were a crucial part in believer’s passage into new life with Jesus—a reality which is important in analyzing and understanding their art.  Three Artists, Giotto (1270 – 1337) - early Renaissance, Masaccio (1401 – 1428) - mid-Renaissance, and Andrea Mantegna (1431 – 1506) - mature Renaissance, sought to create an enduring sacred presence that would support Christian life.

Cimabue, a Florentine painter, encountered Giotto (1270 - 1337), as a boy drawing lifelike images of his sheep, and made him his apprentice. With Cimabue, Giotto studied classical art and the craft of painting, which led to his use of linear perspective in the creation of lifelike compositions that included the viewer as an observer. His painting of the Adoration of the Magi has the feel of a theater set. The stable is a prop, with no evidence of use by sheep. Strangely the shepherds are missing. Perhaps he himself represented their presence.

Yet, his remarkable use of classical form, halos, intense light, stark color, flowing clothing, and evocative detail, creates a compelling spiritual presence, that even today enables worshipers to participate in the Jesus myth. (photo 1) 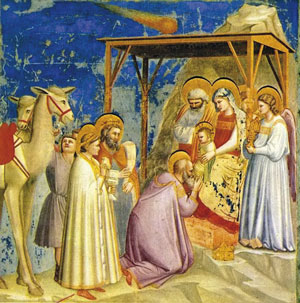 Masaccio’s (1401 - 1428) Adoration of the Magi, maintained the essential spiritual message, as he brought to light the wealth and creative verve of the Renaissance. All the actors in the painting are portraits of Renaissance people. The clothing, saddles and bridles, animals and landscape represent 1400’s Italy. Historic Bethlehem is absent. The figures in black are the patron and his son. Masaccio’s remarkable work portrays all the players and animals in motion, while his use of chiaroscuro gives the figures weight, which, when combined with his realistic handling of the horses, cattle, servants and surrounding hills, creates a living drama. One in which Masaccio conveys his own understanding of Jesus by having the oldest Magi kneel and place his crown before the child, while a servant removes the crown of the second Magi, and the youngest approaches with reverence. (photo 2)

Andrea Mantegna’s (1431 - 1506) Adoration, is packed with emotion. The space is tight. The holy family and Magi are huddled together. The feel of communion emanates. Colors are soft and well integrated. Each character is a portrait of a living person. An older Magi is kneeling, while behind a young Magi’s look of awe fills the space. Baby Jesus looks down at the gifts of Myrrh, Frankincense, and Gold, and with a slight gesture blesses the Magi. The tension between the wealth of the Magi and the poverty of the holy family is significant, and points to Christ’s call for compassion, and love as components of a meaningful life. (photo 3) 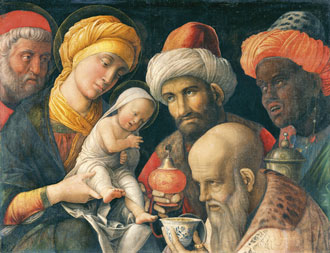 Each of these works reveals the beauty possible in the rebirth of naturalism, imbued with the unquestioning faith present during the Renaissance. The unity of Myth and Art, and humanity’s love of Christmas are eternally present.