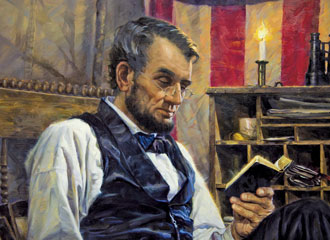 Professor Michael Hogan’s excellent book Lincoln and Mexico has spurred my interest in both topics but for now I’ll stick with Lincoln, with just a brief word about his one-time counterpart in Mexico, Benito Juarez.

A most enjoyable way to learn much more about him (and here I show my film bias) is to see the movie Juarez.* In 1939, Warner Bros. Studio sent a troupe of almost 150 people to the Vera Cruz area of Mexico, where they labored for several months, the effort resulting in what is one of the finest biographical films of all time, as well as one of the most expensive; for several years,  Juarez remained one of the costliest films ever made, second only to Gone with the Wind.

For those who have seen the film, they might have noticed that you can count on half the fingers of one hand the times Paul Muni (the great actor who played the leading role and who had come from the Yiddish Theater) . . . smiled. Muni had done his homework, because Juarez, like Lincoln, was reputed to be perpetually engulfed by melancholia.

Like Juarez, Lincoln was also known to rarely smile—and for good reason:  one of the finest presidents in all of American history was terminally depressed, and had often in his younger years thought of ending his life. Later, his law partner, William Herndon, would say, “Lincoln’s melancholy dripped from him as he walked.”

Arm-chair psychiatrists have placed much of the cause for this on two factors: the commonly-held belief that Lincoln’s father was a cold and physically abusive parent, and that some years later, the one true love of his son’s life, Ann Rutledge, had died at a young age. Such speculation may have some basis in fact, but it is undeniable that from that time on Lincoln would often talk of suicide. In the immediate aftermath of Ann Rutledge’s death, he suffered what might today be called a “nervous breakdown.” After a second breakdown in 1838, Lincoln wrote a poem called The Suicide’s Soliloquy.

But as Lincoln began to establish himself as a shrewd, self-educated lawyer and start his scramble up the political ladder, (and few men have ever suffered more election defeats before ascending to the presidency!) his melancholia gave rise to an unexpected attribute: wisdom. Gloom and genius can be the flip sides of the same personality. Some decades earlier, Lord Byron, faced with a similar melancholy temperament, had called it a “fearful gift.” The “fearful” had to do with a condition that could eventually consign a person to a mental asylum, (or even cause to take his own life) but the “gift” could be a stunning emotional depth and an almost other-worldly wisdom. Still, Shakespeare’s immortal line “To be or not to be,” was much on Lincoln’s mind, as he grappled with what Albert Camus once said was the only serious question human beings ever have to consider.

But at this point the “wisdom” kicked in: Lincoln decided to live because he realized that he had an “irrepressible desire” to accomplish something while he lived, to become connected to the great events of the day, “to impress them so as to link his name with something that would redound to the interest of his fellow man.”  (That he certainly did so could well be an understatement for the ages!)

In his mid-40’s, Lincoln joined the fight against slavery, and fought with   moderates in his own party that thought the curse would eventually disappear on its own. Instead, he believed that the issue could well destroy the country before such an optimistic notion became reality. William Herndon (who was perhaps closer to Lincoln than anyone else, excepting for his mother and Ann Rutledge) was to remark: “Lincoln crushed the unreal, the inexact, the hollow and the sham. Everything came to him in its precise shape and color.”

His melancholia did not allow him to wear rose-colored glasses. Life itself saw to that, and the personal blows he took were unremitting. In 1862, his eleven-year-old son, Willie, died. Moreover, Lincoln’s marriage brought him little if any joy. Mary Todd Lincoln was a chronic busy-body, a compulsive shopper and what today might be called an “airhead.” Why Lincoln married her is another riddle that has never been solved.

The final irony is this: Lincoln preserved the union of a country that from its  inception was noted for its enormous optimism, buoyant spirits and deep belief in its own great destiny—and he did it in the throes of a bottomless depression.

(Note: I am indebted to historian Joshua Wolf Shenk (among others) for the quotes cited in this article.)

*Juarez is in the LCS Film Library.