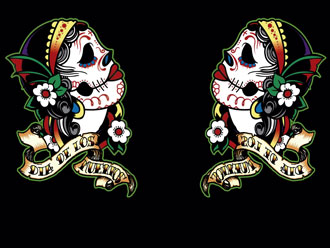 Being from the United States, I came from a background where no one talked about death. We use terms like; deceased, late, passed, or departed. There is usually a period of mourning, a funeral, burial, and perhaps visitation to graves. Death is a fact of life, but it wasn’t until recently people started actually planning funerals before their death. But people didn’t like to discuss death, or death amongst the family or friends. Everything was formal, quiet, reserved. Even the old tradition of wreath or flowers at the gravesite on Memorial Day seems to have slowly disappeared into Memorial Day sales and picnics.

When I first arrived in Mexico, the entire concept of Day of the Dead or El Dia de los Muertos seemed strange to me. In fact, I was uncomfortable with it. But as various aspects of the holiday and the customs surrounding it intrigued me, I grew to love it.

The first experience I had with altars was on a walk down Cinco de Mayo on El Dia de los Muertos in Chapala. The time and effort the families put into each display to honor the lost loved ones was not only heartwarming, but extremely respectful. Items of the dead that were big parts of their lives were on display. People take great pride in presenting their forbearers. Photos, musical instruments, a favorite saddle, or a favorite cigar or tequila are displayed there, along with favorite foods, and even food for strangers to share. We could walk the entire length of the street, and get to know the history of Chapala through the revelations on the altars.

Instead of sullen remarks, there was laughter and enjoyment of the lives shared with the dead while they were still living. To me it felt more honorable and a happier way to remember our lost friends and relatives.

It wasn’t long before my husband and I rented a house with its own altar. I hadn’t realized people made them inside their homes. I thought it was just out on the street or in the cemetery. It was not long before I had made an altar to one of my own recently departed loved ones.

My fascination was also piqued by El Día de los Muertos and the Mexican willingness to laugh at death itself. I learned about catrina dolls and came to understand that originally catrina was an elegant or well-dressed woman, so it referred to rich people, meaning that everyone is equal in death. I collected catrinas, and loved looking at the young Mexican maidens with their catrina make-up art and costumes.

Often shared at this time is a drink known as Atole, a popular Mexican hot beverage, thickened with masa  (a maize [corn] flour or dough that has been soaked and cooked in an alkaline solution in the nixtamalization process and) flavored with cinnamon and brown sugar.

And what Mexican occasion would be complete without music? Whether it is played at the many altars, or cemeteries, or gatherings, there is a plethora of Latin music which melodies poke fun at death itself. At the altars or gravesites people would share the favorite songs of their loved ones.