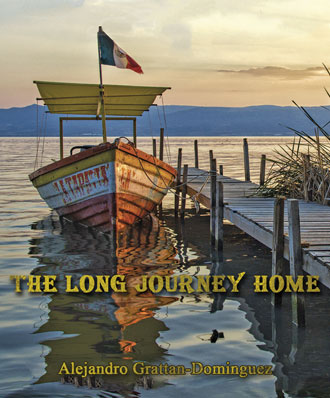 “Journalism can never be silent … it must speak, and speak immediately,

while claims of triumph and the signs of horror are still in the air.”

Every man and woman has a dream for their life, an accomplishment, a way to define themselves, a secret inner hunger. The Long Journey Home is the story of Alejandro Grattan’s search—an adventure through time and space into places forgotten that he awakens, and others new and unexplored. A journey filled with memories, insights, friends, political commentary, and the nuances of life.

Throughout, his fearless writing points to disconnects and inside stories on writers, filmmakers, actors, and politicians conveyed with wisdom garnered from his rich trove of experience. Grattan consistently entertains, and informs with focused intelligence about a culture, that for better or worse, is one in which we are all entangled.

Many years before the advent of The Long Journey Home, Grattan was captivated by the lure of opportunity in California, where, as if by magic he became a film director and screenwriter. After a string of successes, including his feature film Only Once in a Lifetime which premiered at the Kennedy Center, he moved to Ajijic, where he began to write novels. Again, as if by magic, his historical novel The Dark Side of the Dream, a provocative look at the reality of Mexican workers and soldiers in the United States, was broadly acclaimed.

After publishing seven novels, years of study and exploration, as well as encouraging other writers and serving for twenty three years as Editor-in-Chief of El Ojo del Lago even while mentoring Lakeside’s largest and oldest writers’ group, he has come to realize nothing happens by magic; his dream was always wrapped in a process of revelation. The Long Journey Home is his conspectus.

To understand this complex and accomplished man and his writings, I some time ago decided that it was his love of dogs that turned him into a “watchdog” of the ups and downs of human endeavor. His uncanny ability to dig out the bones of relevant news and stories of human interest and to share these treasures in this book of well-crafted essays, supports this thesis.

For thousands of years humans have shared experiences and significant events that occur within the boundary of well-defined communities. Today we exist in a global village where boundaries have lost meaning. A time where the vagaries and the speed at which information and misinformation are disseminated, leave us exhausted and ill informed. Grattan, in contrast, as both an editor and a writer for El Ojo del Lago, has consistently provided focused content which intelligently synthesizes universal and local happenings with a sensual awareness that expands horizons and encourages discourse.

His essays, consolidated in The Long Journey Home, present a progressive and open understanding of life, supported by careful research, insatiable curiosity, insight, and unfailing acumen that together present honest observations that avoid the common realm of unstudied opinion. This progressive bent is augmented by his uncanny ability to discern what’s essential and find the extraordinary in the ordinary.

Grattan’s reflective gifts and focused understanding of writing make this anthology a fascinating soiree through time. Stories flow with an inundation of precise words that have the force of a full-blown summer thunderstorm. His concise summations, brisk, no-nonsense essays touch the heart and awaken a reader’s sensibility. In an essay on Hemingway, he writes, “Rather than ‘pretty up’ his work with decorative adverbs … (Hemingway) put his stock in unique nouns, muscular verbs and some of the best dialogue ever written.”

Art engenders emotional reactions created by well-developed characters and their interactions within a well-structured story. Through some of Alejandro Grattan’s writings, (which include several short stories) now chronicled in The Long Journey Home, character, story, and refinement of language create memorable dramas filled with unexpected twists, as in his article about Margaret Mitchell of Gone with the Wind fame.

Moreover, Grattan-Dominguez seemed to learn early on that the creative process requires that a writer use everything he has, including his soul. He has done just that in The Long Journey Home.

(*Soon available on Amazon. Now,  along with his seven novels, in the LCS Library in the Local Authors Section.)