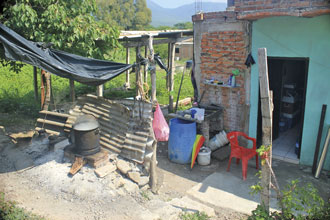 The Tepehua Community Center was introduced to the Cement Stove by FWOP (Future Without Poverty) organization. Designed for Third World Countries, it is a stove to replace open wood fires that are so dangerous to cook on.  It is relatively cheap to build, wood burning, but remains cool to the touch.

Mexico is not a Third World Country by any means. With its mining riches of assorted minerals plus gold and silver, oil, etc, and rapidly growing industrial parks, it could be up there in the big five if it weren’t for the corruption of governments.  Pundits predict Mexico will be in that group in the coming years.

For the pockets of extreme poverty found in barrios, this stove is the answer to a lot of ills.  Although a simple design, it has to be specific, with special components to make it work. Its design keeps the wood contained and a specially crafted area makes the wood burn slowly retaining  heat on the top plates, with a flu pipe to carry smoke out of the house. Its size can vary according to the needs of the family.

It eliminates the accidental burns of pots tipping over on open fires as wood shifts, cuts down on wood needed, eliminates smoke inhalation causing lung ailments in babies and adults.  For the small home it is far more efficient than a small gas stove, whose cylinder is such a hazard, and an ill afforded cost.

The stove is adaptable.  In the case of Lupe, living on her own at the age of 84, a tiny stove was built outside her shack, not very high off the ground to match her three foot frame.  Hers is poverty at its worst. Or Alfredo and his son - they live in a tent that just covers a bed, so the stove was built outside with two burners. Most have three burners and a place underneath to store the wood.

Under the watchful eye of Fred Snyder, from Rotary Ajijic, who supervised his team closely, eight stoves were built in the Tepehua Barrio just outside of Chapala, with a grant from St.Andrews Church in Riberas.

There is now a long waiting list.  Although the stove is free for the people through the Tepehua Community Center, those who receive the stove have to help with the labour, or help their neighbor if it is a single Mum or the elderly like Lupe.

Lupe has two sons who live in another barrio, struggling against poverty like their Mother. Neither of them could afford the luxury of education when younger, without which there is little chance to break this cycle. Meanwhile, life can be made easier for them with a little help.

The basic cost of the bricks, mortar and attachments per stove, is approximately $200 USD.

Depending on the exchange rate...sometimes (if one is small like Lupe´s) the dollars can be stretched to cover two stoves.

Looking into the future, we not only want to help save unnecessary burns and congestion of the very poor, we would like to start a small industry for the men locally.  We are training the team and giving them the tools.

With your help, and if you have an interest in the construction, contact Moonie

Simplicity at its finest. 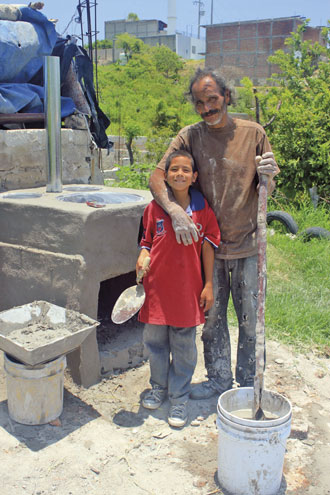