Justice Deferred But Not Forgotten 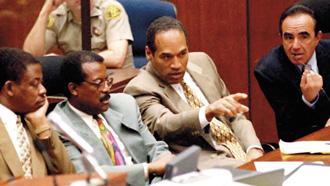 Note: After a recent meeting of the Ajijic Writers’ Group, I was chatting with Tom Eck, formerly a highly successful attorney and today a frequent contributor to the pages of the Ojo, when we discovered that we strongly disagree about the guilt of OJ Simpson when it came to the verdict handed down in the murder trial of Simpson’s wife, Nicole and Ron Goldman. What follows is an Ojo article that I wrote many years ago, and Tom’s rebuttal that he recently wrote, which is published in this same issue.

In October of 1995, a verdict was rendered in a Los Angeles courtroom which almost immediately was heard around the world. Simpson had just been acquitted of the murder of his wife of some 16 years, Nicole Simpson, and of Ron Goldman, a young waiter who just happened to have brought back to her a pair of eye-glasses which she had earlier left in the restaurant in which Goldman worked. Nicole was living at the time with her two young children in an apartment a mile or so away from the estate that she and OJ had shared for many years.

In the opinion of many knowledgeable people who had followed the trial, the evidence against Simpson had been overwhelming. Later, many legal journals and distinguished jurists would concur with this judgment. The evidence included:

• A glove with the blood of both Nicole Simpson and Ron Goldman had been found at the rear of the Simpson estate.

• Blood traces of both victims had been found in Simpson’s Ford Bronco.

• Samples of Simpson’s hair had been found on Goldman’s shirt and on the other glove that had been left at the scene of the crime.

•Some of Nicole Simpson’s hair was found on the glove found at the rear of the Simpson estate.

• OJ Simpson had failed a lie detector test by some “22 points,” which is considered “highly damaging.”

• Simpson’s DNA had been found at the scene of the crime.

• Simpson had a proven history of having repeatedly battered his wife. Some of the frantic calls she had formerly made to Emergency #911 had been played during the trial.

• Disposition of motive evidence contained proof that Nicole Simpson had recently denied Simpson’s attempt to reconcile with her, and on the day before the murder Simpson’s current girlfriend had walked out on him.

• The time-line eventually established that Simpson left plenty of time in which to commit the murders before he caught a flight that same night, bound for a business meeting in Chicago.

•A sock containing the blood of Nicole was found at the foot of Simpson’s bed.

• On the day Simpson was scheduled to be taken into custody, he attempted to flee, taking with him several thousand dollars, a disguise and a passport.

• Some 150 exhibits and/or witnesses were presented by the prosecution, all bearing on the guilt of the defendant. Further, almost all the arguments against the aforementioned prosecution exhibits were seemingly shot down, one by one.

Why then such an inexplicable verdict? Because a jury heavily freighted with African-Americans was loathe to condemn to death a man who was an icon who had proven that people of his race could reach monumental heights, (though Simpson had never seemed to go out of his way to do anything much for his own people). The problem with the jury was further exacerbated because most educated people, blacks and whites, could not take so much time away from work to serve on the jury, and had been excused for “hardship reasons.” That left a jury pool of relatively uneducated people.

Another reason was that the presiding judge was in way over his head and faced with a celebrity-studded defense team seemed to totally lose his objectivity. Judge Lance Ito’s careless conduct of the case was such that his reputation was forever tarnished.

But the crowning blow came when one of investigating detectives, Mark Fuhrman, who earlier had claimed to be totally non-racist, was proven to be otherwise. The defense had claimed that Detective Fuhrman had planted most of the evidence cited above, a claim the prosecution had repeatedly annihilated, but which with the later revelations regarding racism gained an undeniable stature, albeit one utterly unconnected with the facts in the case. Yet given the despicable history of the LAPD vis-à-vis the black community, one could almost sympathize with the verdict.

In 1997, however, the case was again tried, this time in a civil court that could not send Simpson to jail but if finding him guilty of the murders of his wife and Ron Goldman, could award the plaintiffs monetary damages. The turning point came when Simpson, forced to personally testify (as he had not in the criminal trial), was subjected to a blistering cross-examination that virtually sealed his fate. The award came to more than 25 million dollars in punitive damages, with another 8.5 million awarded to the Goldman family for compensatory damages. Of this combined sum, Simpson would pay, by most estimates, far less than even one percent of the award.

Some years later, however, in an ironic twist for the ages, he was sentenced to a maximum of 33 years in prison for armed robbery, (though eligible for parole in as soon as 2017.) The sentence came on October 3, 2008, exactly on the day of the month that he was acquitted of murder in the criminal case.

The sentence struck most people (including this writer) as grossly excessive but in closing it seems appropriate to cite an old quote which has become a proverb: “Though the mills of God grind slowly, yet they grind exceeding small; though with patience He stands waiting, with exactness grinds He all.”

Those of a more modern generation might have a different explanation: it’s called karma.

Latest Update: O.J. Simpson was recently granted a parole, and will be free to leave prison after September 8.