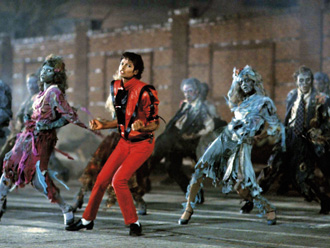 According to Wikipedia, Michael Jackson’s “Thriller” album burst upon the world stage in November, 1982, with a production budget of $750,000 USD. and is still the world’s best seller. Michael Jackson was also instrumental in breaking the racial barriers in pop music, opening the way for other black entertainers to succeed, using MTV, and resulting in his White House visit to President Reagan.  This was also a time when no black artist graced the cover of magazines, with editors claiming they didn’t  ‘sell’ the product.

Although Black History/Future has taken steps in the right direction, equality for all, due mainly through the arts, white supremacy is raising its ugly head again, and lack of tolerance for others is predominant.  One of its founders, David Duke, ranting and teaching hate, used his contributors’ money to pay gambling bills, pleaded guilty to fraud and tax evasion in 2002, yet still managed to draw those who fear that which they do not understand. Equality is not something to fear; immigration and other cultures coming together is a strengthening factor.

Michael’s life, like many artists in history, was a tormented one – he was never sure what color of skin he could be comfortable in.  Today, would he enjoy Black Pride?  There was no doubt he endowed the world with an incredible gift. A legacy like no other. Music.

“Thrill the World” is an annual International event attempting to break a world record of zombies from as many countries as will participate, and its author Ines Markeljevic’s intent was to unite the world through music/dance.

Guinness Book recorded the first event in Toronto, Canada in 2007, claiming 1,722 people participated in 80 Cities from 17 countries.  After costs, the rest of the money raised went to charities around the world.

YOU ARE INVITED to participate this year. The actual event will be on October 28th in the Ajijic Plaza’s Cultural Center at 4pm.  The rest of the world will be dancing with you.

Rehearsals will be twice a week starting on September 9th from 1pm until 3pm, and Wednesday from 5pm until 7pm. You do not have to attend both, unless you have two left feet.  You can also practice at home...just google Ines Markeljevic’s instructions for zombie dancing.

Cost to participate is $350 pesos a ticket, which will also get you a BBQ meal catered by Manix, with some of the proceeds going to the Tepehua Community Center, AC, whose Mission is to help Women and Children help themselves by leading them into education, which is the only way to stop poverty, bigotry, and the other ills that plague our nations.

Should you wish more information or how you can help, contact This email address is being protected from spambots. You need JavaScript enabled to view it..  They will need organizational help too.

Lets do our part.