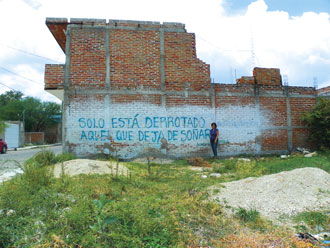 “One who is defeated is one who stopped dreaming”.

A new graffiti on the walls of Tepehua, to be proud of, people stop to take photographs.   Beautifully written and grammatically correct. (I am not to sure about the translation, but it is close). This writer does not know the Author yet, but the hunt is on.

The spay and neuter program of Operacion Amor at the Tepehua Community Center was successful in more ways than one. The writer has seen gangs of young men sitting around anywhere they can log into WIFI, (usually outside the Center smoking weed) and with them are always street dogs....snoozing gently. An aura of comradeship. At the spay and neuter program Tepehua, the boys kept bringing in dogs on chains...claiming them as their own and getting them ‘fixed’.  It was found out later they released them back on the street.  The street dogs and their young male companions are a special family, they belong.  A family formed out of need.

A little boy about seven, wandered into the Center and asked if he could help,  Harvey Bernier was doing the tattoo on the animals to show that they had been treated, so they worked together on those still anesthetized. But a boy walked out the door with a dream...to be a veterinarian. Websters definition of dream: A strongly desired goal or purpose.

“To sleep, perchance to dream”, Hamlet was contemplating suicide, but he was afraid he would still dream in that final sleep, so he took revenge for his Father’s death instead. This writer is basically talking about “Day Dreaming”; in life where dreams become a reality.  Amy Fries wrote:  ‘Many of us see the relationship between daydreaming and creativity in the arts and science, but slow to see its usefulness in business.  But say ‘the visionary’ and we can understand how having a vision, a mental image or plan-can help somebody start a breakthrough company or service.’ unquote.

The Tepehua Comunitario Center has created many dreams, by not only putting young children into the local school system, but sending others on to University pursuing dreams they once never dared to dream.

Native Americans believed in “Dream Catchers”, knowing the night was full of dreams, good and bad, they created the circle to catch all dreams, the bad dreams got entangled and died with the first mornings light, but the good dreams went through and slid down the feathers to the dreamer.

One is never too old to dream.