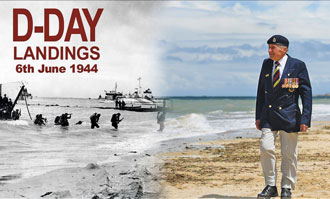 (Given what recently took place at the last NATO meetings in Europe, we thought the republication of the following editorial might be especially relevant, in that almost every member country of that organization was with the Allies, one way or another, in the invasion of Normandy.)

The Day the World Held Its Breath

This last June 6th marked the 65th anniversary of D-Day, a day in which the future of the entire world literally hung in the balance. To honor the men who fought and had died in the invasion of Normandy, the presidents of the United States, Britain, Canada and France gathered at an American cemetery on a bluff overlooking one of the four beaches onto which 150,000 Allied warriors would storm over the course of June 6, 1944 and in the days that immediately followed.

The invasion would mark the beginning of the end for Hitler’s once-invincible Third Reich, but it came at a huge cost. Nine thousand Allied soldiers were killed the first day and within a month there would be another 120,000 dead and wounded. But these men had both history and unity on their side, and of the many unforgettable moments that marked the battle was how thousands of men who had been wounded refused to allow themselves to be taken away from the front lines. What drove many of those courageous soldiers, thousands of whom were teenagers just out of high school, was best summed up by a young American major with a flair for poetic language: “Many of us sensed that we had come to the hour for which we were born.”

The logistics of that invasion have never been equaled, either before or since. The Allied Armada included 5,000 ships, 250,000 vehicles, several portable piers, thousands of planes and 20,000 paratroopers, all in support of an initial battle that was won ultimately on the beaches, one yard of sand at a time. These men had vowed that freedom would not be pushed back into the water. Within that commitment, they were carrying the hopes of one age and the dream of all ages.

Upon the occasion of the 65th anniversary of the invasion, Presidents Obama, Brown of England and Stephen Harper of Canada all made memorable speeches. But perhaps the most touching was the speech by France’s President Sarkozy, who went out of his way to thank the United States for the huge contribution it had made to the liberation of France. Centuries earlier, France had been the American colonies first great ally and had sent over one of its best military tacticians, General Lafayette. During the First World War, when the American Doughboys (of whom my father was one) landed in France, General “Blackjack” Pershing had paid homage to America’s debt of gratitude by saying: “Lafayette, we are here.”

The somber backdrop for the recent anniversary was the American Cemetery, where over 5,000 men have been laid to their final rest, a sight which prompted reflection not only on D-Day but on World War II itself. It has been called the “last just and great war.” Historians can argue about that but what is indisputable is that America has never again been so united.

At the site of another great battle, President Lincoln expressed it best when he said, “The world will little note, nor long remember what we say here, but it can never forget what they did here.”

Eventually, the United States would lose more than 250,000 men and women in WW II. But those five thousand buried in France seemed to be speaking for all the other brave Americans in whispering that we should always have the same overwhelming reason as we had in WW II before ever again sending our courageous men and women off to fight and possibly die in another war.