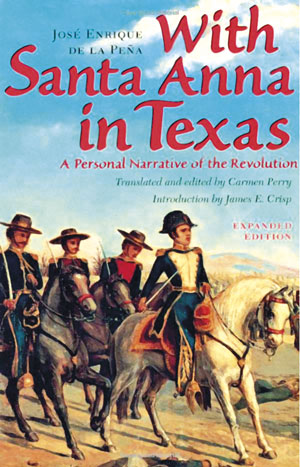 The 200 defenders of the Alamo, highly romanticized, including a film by John Wayne, also comprised a dozen Mexican nationals called Tejanos. They wanted to restore the liberal Mexican 1824 Constitution. Texas did not declare independence until the defenders were already in the Alamo; so as far as they knew, they were fighting against the rule of Santa Anna – not for separation from Mexico. The Alamo was an old Spanish mission for converted Indians that also served as a fortress.

Texas independence was significant, because Texas became a republic and then was annexed to the United States. When that happened, there was a dispute whether the Rio Grande or the Nueces River was the border. Abraham Lincoln, then a congressman, believed it should be the Nueces, which is east of the Rio Grande and would have left Mexico with more territory.

The dispute led to the Mexican-American war (I always feel a twinge of guilt when I see the monument to the Niños Heroes in Guadalajara.) The result of this war was a huge expansion of territory for the United States, but also, an escalation in the debate over slavery. The abolitionists feared an expansion of slavery into the newly acquired territories, and the slave owners believed they needed to extend slavery in order to preserve it. The sequence of colonization in Mexico by Americans, the rebellion of those colonists, the Republic of Texas, statehood, the Mexican-American War, and the flaming issue of slavery in the new territories are all part of the narrative.

One of the most important sources for the history of this era is José Enrique de la Peña. He was an officer in Santa Anna’s Army and kept a diary from which he later wrote an account. Many believed de la Peña’s account of the Mexican campaign in Texas was a forgery, written after his death. His diary reported that Davy Crockett, among six others, surrendered. Then Santa Anna executed them. This contradicted John Wayne’s enhancement, but Sam Houston knew about the executions and called Santa Anna a “murderer.” More recent scholarship has shown de la Peña’s account to be authentic, and apparent conflicts of time and place have been resolved.

History could have been different. De la Peña described Santa Anna as a stubborn, irritable, and incompetent despot, and that there was no reason for Mexico to lose Texas. He wrote that all Santa Anna’s generals advised him to bypass the Alamo, because it had no military value. Even Sam Houston had ordered the Texans to leave, because it wasn’t important and would be impossible to defend. He sent Jim Bowie to the Alamo to destroy it and return to East Texas with all the men and artillery stationed there. Bowie decided to ignore Houston’s orders and stayed to defend the city.

Santa Anna lost 600 men to the 200 Alamo defenders. Furthermore, many of his men deserted after the battle to join the Tejanos who wanted a return to the Constitution of 1824.

At the Battle of San Jacinto (on today’s Houston Ship Channel), Santa Anna was so confident that he allowed his men an afternoon siesta and posted no guard. Sam Houston took the Mexican army by complete surprise and Texas was won.

De la Peña’s account of his time in Texas with Santa Anna is filled with examples of bad planning and strategic mistakes. He criticized Santa Anna for not using the Mexican navy to carry troops and equipment to the eastern part of Texas where the rebellious colonists were. Instead, the Mexican army made long and difficult marches across arid lands.

After Texas, de la Peña joined General José de Urrea in armed opposition to the Mexican government in an attempt to restore the Constitution of 1824. This resulted in his imprisonment. It was from multiple prisons that he wrote his account of the campaign in Texas. He became ill and disillusioned before his death in 1841, at age 34. A fellow army officer shot and killed de la Peña on a street corner in Mexico City.

Following an auction of $387,500 for the original manuscript of 200 pages, it now belongs to the University of Texas. Access is limited, and researchers are generally provided with photocopies. This article owes a special thanks to Randall Schott, a friend from Texas, for providing a translated copy of de la Peña’s manuscript, with scholarly analysis. The English title of the book is With Santa Anna in Texas.