“One way of seeing beneath the surface is to create a hole, a window into what is below.”  —Andy Goldsworthy

Jose Luis Cuevas creates just such an opening in Mexican society. He reveals a dark underworld inhabited by soulless humans who live without focus or meaning—who drift into addiction, crime, houses of prostitution, and insanity. “A decadent shadow world,” Cuevas said, “Ignored by the Muralist led by ‘los tres grandes’,” (Rivera, Siqueiros and Orozco.) Frustrated with their decorative, politicized art, Cuevas created a storm with an exhibit of provocative works that exposed an infirm core within society.

His neo-humanistic focus seeded a “new wave movement” among Latin American artists. In response, the ‘art establishment’ blocked access to rebelling artists. An angry Cuevas wrote, “We are locked in a musty Mexican closet.” He followed with a poignant story about a young artist breaking through a “Cactus Curtain.” His story precipitated a war with heavyweight conservatives, while progressive intellectuals, including art critic Marta Traba, and art curator Jose Gomez Sicre (who introduced Cuevas to Europe and New York) provided transformative support.

Self Portrait in Blanes, (photo 1) reveals Cuevas’ power of observation and innate artistic talents. Within what appears to be a bar/whorehouse, two women, distorted in form by their life’s work, pose available, as two men, one transformed into an anthropomorphic predator, the other a pensive Cuevas, consider their options. In the background, the Madam oversees events, while an enigmatic face peers out from behind a curtain on the right. The work radiates an overwhelming sense of lost-ness, degradation, and apathy. Cuevas wrote, “I make symbols of them, stripping all that is transient … I render them universal in their repulsiveness.” 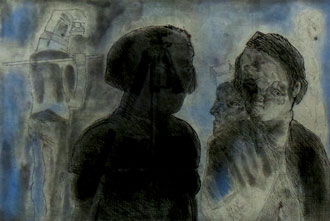 Cuevas’ compositions are provocative. Color creates ambience --- affect that heightens the inner mood. With the deft hand of a master, lines are given life, they breathe essence and form into his subjects. Unnatural juxtapositions of forms invoke a silent world through which humans of variable size drift.  Combined, these elements create a well defined, psychological world that exists beyond what words can convey.

As he walked the back streets and poor barrios of Mexico City, Cuevas encountered a factious, ‘Bruegelesque’ hell of absence, consumption, human degradation, and insanity (he feared this might be his lot). His drawings and paintings come to life in this eerie nether-land, where an odor of desperation seeps outward to be inhaled by viewers who emotionally absorb their emptiness, and pain. (photo 2) 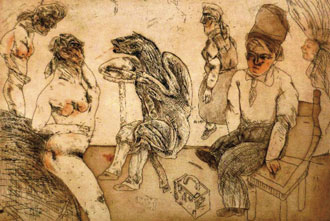 His paintings, drawings, and etchings are visual poems whose content has been shared by Mexican/Spanish poets like Leon Felipe –

Let me wallow in this cesspit,

where life is a green phantom

that no one has ever seen.

Cuevas’ works are plays with distorted beings who play human roles. Grotesque or anthropomorphic forms reveal the volatile, psychological world that exists within his subjects. “My works render the human condition, so I need to exaggerate the figures … as in Pre-Columbian art, where my roots are…”--- a world where kings and priests take on the characteristics of a jaguar or other animals. Empowered, his characters became gods like those who acted on the stage at Ex Balaam.

We enter the dark world of Bruegel’s Torment of Death, Goya’s Third of May, Edvard Munch’s Scream, Francis Bacon’s Portrait of Pope Innocent 10th, and Heather Horton’s Depression --- all visions of unrestrained shadows walking through life. (Link to paintings below)* Cuevas teaches us to see and understand that the world remains a fractured reality in need of healing.

He reminds us of who we become if we accept fate with indifference. He exposes how our affluence and self indulgence steal hope, health, and space from those we take from but never see.  We (humanity) become the anthropomorphic beast Jose Luis renders. Understanding, “an unexamined life is not worth living,” Cuevas anguished over the causes --- avarice, corruption, and societal brokenness. His art brings to life the world of indifference that society evades.