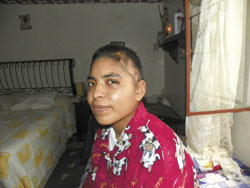 Brazil has 12.95, closely followed by Mexico with 12.69. These three top a very long list and the one at bottom is Japan with 0.05. Mexico has two arms laws: ‘The right to bear arms’ and ‘The right to keep arms’. Which are different.

‘The right to bear arms’ means anyone in the military branches, law enforcement, etc have the right to ‘carry’ without applying for a special license, they are exempt. All others who wish to ‘carry’ have to apply for the special license, such as public officials and politicians, private guards and privileged families, bank guards etc.

“The right to keep arms” applies to you and me, we can keep in our homes 10 guns, (9 long guns and one hand gun).  KEEP IN OUR HOMES is the operative word here, we are not allowed to ‘carry’. But all weapons must be registered with the Federal Government.

According to David Kopel, fourteen per cent of Mexican’s have a firearm in their home, and of that 50% are in poor neighborhoods with a high violence rate.  The Government does not defend these areas, so Citizens defend themselves.

Unintentional gun deaths in Mexico in 2014 was 0.47, in the United States it was 0.30 and in Japan 0.01.  57% of accidental deaths were with hand guns as opposed to long guns, and more unintentional deaths in rural areas than cities, which is not surprising as most guns are in rural homes rather than city homes.

Jacqueline, one of the Tepehua Community Centers brightest young students, heading for college which was her dream, was shot in the head two weeks before Christmas.  A young nephew had found his Fathers gun and with the curiosity of youth, played with it, it went off and struck Jacqueline just above her left ear entering her brain. It shattered, the main part was lodged in the brain. The medics removed most of the shards, including the bone splinters, but  decided to leave the bullet and another large quantity of shards in the brain, as removal could result in brain damage. The tenacity of youth to survive worked, she is walking and speaking, she remembers speech in two languages, she has balance...everything that points to a recovery. Except that fear of having a foreign object lodged inside her head, and every new twinge suggesting it is moving.

Which is rare once scar tissue builds up, but tell that to a teen who has a bullet in her head, she is living with fear. Without the help of the Tepehua Free Clinic, getting the vital medicines she needs would be impossible for this family, only the operation was free. Some of the medication she will be on for life. Without a Rotary grant from Rotary Seguin, Texas, for the free clinic of Tepehua, this could not have happened. For so many years arguments for and against gun control has raged.  Mexico has about one or two licensed gun shops in the whole of Mexico, which makes sense.  That is the beginning of control.

Stateside, should a family shop like Walmart’s or any of the chains be licensed to sell arms?  In a licensed establishment they have to stick to the rules or get closed down...a place like family chain stores, when an incompetent sales person doesn’t do the back ground checks or stick to regulations they get fired, they are then replaced.

That, of course does not address the incompetent gun owner, who keeps a loaded gun in a home with children, or the black market where guns abound no questions asked. The insanity of all this paints a morbid future. This column addresses the unintentional deaths by and of children. What about the victims that survive like Jaqueline...some in a vegetable state and others living with that fear perhaps one day that bullet they carry may move, or they will die in a wheel chair...these and many accidental shootings are not counted.

Look at the intentional shootings, that are multiplying each year, again with children being able to get guns and commit suicide by taking others with them?

Science has the ability to rid the world of polio or TB...not totally but enough that children are safer...why can’t we rid ourselves of gun plague?  The Author has no answer. Just anger at the insanity of it all.

Jaqueline was not the only victim, the young boy who shot her is traumatized and needs help. They become a burden to a family that already carries the burden of poverty. Whilst it is true the owner of the gun is at fault and should be booked for endangerment, they are all victims of the broken society we seem to be living in. So for those who believe in the ‘right to bear arms’, help us solve this problem, and for those who have the ‘right to keep arms’? keep them out of your children’s hands, they have the right to live.

This week, Jaqueline is well on the way to recovery, in three months it is possible she may return to college. She is one of the lucky ones.