We’re Off to See the Wizard! 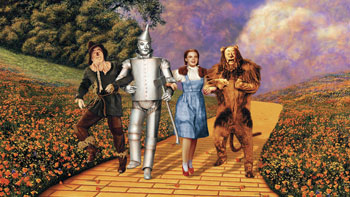 This past year marked the 75th anniversary of The Wizard of Oz, which was recently named “the most watched movie ever” by the Library of Congress. Since the film’s debut in 1939, it is estimated that more than one billion people have seen the film—but the movie was not a hit when it was first released. Here are some other lesser-known facts about this classic which has been called (rightly) “the most beloved film of all time.”

Judy Garland was only 16 when the film was made, and California law permitted MGM to work her only four hours per day, with the rest of her day spent in a studio classroom.

The 1939 movie was a remake. Two silent films had preceded it, one with Oliver Hardy of Laurel and Hardy fame.

The Winged Monkeys soared through the air with the aid of piano wire. This was long before the Digital Age, and such stunts were much more difficult back then.

When the film first opened, it rarely played more than three nights in any one theater. (Little wonder then that it did not earn back its production cost until some ten years later.)

The expensive paint used to paint the Yellow Brick Road did not photograph properly, and cheap ordinary house paint was finally used.

Before scheduling the gala premiere in Hollywood, MGM screened the movie in four small towns back east—just to make sure they had a winner.

The jacket the actor Frank Morgan wore as “Professor Marvel” came from a thrift shop, but that was too prosaic for the studio’s publicity department —so it sold the story that by sheer coincidence the jacket was later found to have once belonged to the tale’s originator, L. Frank Baum.

The “Munchkins” were recruited from all over the United States, and even from Western Europe. When they arrived in Hollywood, they were all booked into a single hotel, and before the filming was over, the naughty little people had done everything but burn it down. In later years, Judy Garland would not-so-fondly remember that many of the male munchkins delighted in pinching her rear-end.

Toward the end of filming, the picture’s legendary director, Victor Fleming, was pulled off the production to take over the reins of Gone with the Wind, whose production was in serious danger of foundering. The director, a charismatic mixture of Irish and Choctaw Indian, had been chosen because of his close friendship with Clark Gable, of whom it was said had modeled his screen persona after Fleming’s ultra-macho personality.

The year Wizard was released is considered the best in the entire history of Hollywood; no idle boast when one remembers that this same year would bring forth such classics as Stagecoach, Goodbye Mr. Chips, Mr. Smith Goes to Washington, Love Affair, Ninotchka, Wuthering Heights, and Of Mice and Men. That same year would also mark the first time that a person of color, Hattie McDaniel, would win an Oscar for her work in Gone with the Wind.

1939—truly a vintage year. Had it been a wine, it would have been too expensive to drink.