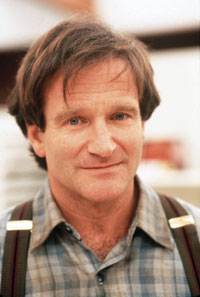 Sigmund Freud once said that a person’s disposition is often set by the age of five—and perhaps this was true of Robin Williams. Raised in a wealthy suburb of Detroit, his father was an executive with one of the auto industry’s Big Three car companies, but neither he nor his wife spent much time with Robin, who was an only child. Years later, he would recall that left alone to play with dozens of expensive toys, he tried to break the solitude by giving them all names and voices. Later, as a chubby, small child in grade school, he would often use humor to disarm schoolyard bullies; so despite a privileged background, and perhaps from an early age, he came to regard life as something to be endured rather than enjoyed.

Luckily for him (and much of the rest of the world, as well!), he discovered that he did greatly enjoy acting, and after high school enrolled at the Julliard School in NYC, where he became best friends with Christopher Reeve. Many years later, after Reeves’ fall from a horse had left him crippled for life, the handsome actor would recall that his good friend was the first to visit him in the hospital, storming into an intensive care unit fully dressed in a doctor’s scrubs, sporting a foreign accent and announcing to Reeves that he was a Polish proctologist there to conduct a personal examination. Reeves later said that had he not been strapped to a table, he would have fallen to the floor with laughter.

The mold had been set, and it was only a matter of time before the comic was hired on Mork and Mindy, which soon became one of the most successful TV shows of all time, often playing to some 60 million viewers each week! In another great stroke of luck, Williams would meet Jonathan Winters, who became his idol, mentor and fellow space traveler, but whose own life would end sadly.

Winters, though a great improvisational artist, lacked the young actor’s depth and range, talents that would eventually bring Williams many of the entertainment world’s most prestigious awards. But there was more at work here than mere critical and financial success. A famous French writer once said that up until age 40, God is responsible for what we look like; after that, we are. Ultimately, Robin Williams came to look like the man he had become: a noble humanitarian, spokesman for the disenchanted and disenfranchised and a proud vessel harboring a talent for the ages.

In his relatively brief lifetime, he raised tens of millions of dollars for the homeless, this among many other worthwhile causes—and like Oscar Wilde, another unique talent, he knew that if you purport to tell people the sad truth, the best way is to make them laugh. In doing this, he became like a great clown who could make people’s eyes dance with mirth even as his own filled with tears.

My first thought upon hearing that this magnificent human being had committed suicide was of Frank Capra’s immortal film It’s a Wonderful Life. Made in 1946, the movie is today a perennial holiday favorite with TV audiences all over the world. For those unfamiliar with the story, it deals with a small town businessman who believing that his life has been a total failure finally attempts to kill himself. But he is saved by an “angel,” who to prove to him that he is not a failure, takes him back in time to show him that he did far more good than he had ever known. His life had touched so many others whose own lives had become better because of him. The original inspiration for the movie’s script had been a single sentence from a 1930’s greeting card: No man is a failure who has made at least one friend in his life.

Robin Williams made tens of millions of them, but still he who had brought so much joy to so many people could no longer find it for himself. Where was Capra’s angel when we really needed him?

On the subject of angels, a quote by Shakespeare lamenting the death of another good man who died too soon seems appropriate: “Now cracks a noble heart. Good-night, sweet prince; and flights of angels sing thee to thy rest.”