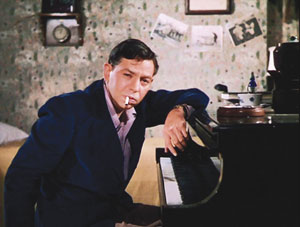 Someone once said of him, “Had Oscar never existed, some screenwriter would have had to make him up.” Luckily, he did exist—and what a life he lived! Before it was over, he was known around the globe as a world-class pianist (and the premier interpreter of the magnificent “Concerto in F” written by his close friend, George Gershwin), studied classical music with Copland and Schoenberg, wrote the musical score for more than 20 movies, was a charter member of the famed Algonquin Round Table, co-starred in two of the best musicals of the 1950’s, An American in Paris and The Bandwagon, and in Rhapsody in Blue, played himself in the film bio of George Gershwin—and was allowed to write his own dialogue in all three films!

Levant also found time to complete three memoirs, (including the best-seller Memoirs of an Amnesiac), become a regular on the TV show Information, Please (where his inexhaustible erudition was a mainstay of the popular program) and became a compulsive hypochondriac, total neurotic and addicted to all sort of worthless panaceas.

He also became famous for his scathing wit, as quoted in his lifetime as another Oscar (Wilde) was in his own. But as some punster once proclaimed, “For every pearl that comes out of Oscar’s mouth, another pill goes in.” Yet the number of those “pearls” is endless, though the following short list must suffice for now:

I was thrown out of a mental institution for depressing the other patients.

I knew Doris Day before she became a virgin.

I don’t drink liquor. I don’t like it. It makes me feel good.

(About a famous film producer) “He’ll double-cross that bridge when he comes to it.”

I have given up reading books; I find it takes my mind off myself.

Behind the phony tinsel of Hollywood lies the real tinsel.

Every time I look at you, I get a fierce desire to be lonesome.

A pun is the lowest form of humor—when you don’t think of it first.

I’m controversial. People either intensely dislike me or hate me.

There’s a fine line between genius and insanity. I have erased that line.

I want my tombstone to read: I told them that I was ill!

Now, here are two stories that very few people know. Many years ago, I had a young lady friend who was Levant’s private nurse in the last days of his life. By now, confined to the master bedroom in his home in Beverly Hills, he was addicted to the old daytime courtroom TV shows— and such was his guilt over one thing or another that every time the judge would slam down the gavel and ask the defendant to rise, my friend said that Levant would slowly come to his feet.

During this same period of time, Oscar—now terminally depressed—would often threaten to end it all. One morning, the threat seemed more ominous than usual. Alarmed, my friend called his psychiatrist and made an appointment to bring Oscar to Mount Sinai Hospital. Once there, she became alarmed again when the doctor—apparently having had his fill of Levant’s suicide threats— challenged him to step out on the balcony (which was on the seventh floor) and throw himself off so as to finally make good on his threats.

With that, Oscar walked out, looked at the pavilion below, then turned to the doctor and said, “I can’t kill myself now. It’s lunchtime. Lots of people milling around down there.  I’ll do it later.”

“Oh, come on, Oscar, why let a little thing like a bunch of people stop you?!”

“Doctor, you know how I hate mixing with strangers!”

At that, all three people in the room had to laugh. Wit, it seems, was the last thing to go when it came to the incomparable Oscar Levant.