“The simplicity of the everlasting truth” 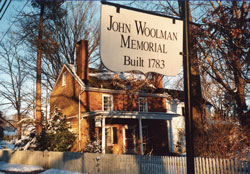 John G. Whittier, the “Quaker Poet,” concluding his introduction to the 1871 edition of the Journal of John Woolman, “the Quaker Saint,” wrote:  “I am not unmindful of the wide difference between the appreciation of a pure and simple life and the living of it, and am willing to own that in delineating a character of such moral and spiritual symmetry I have felt something like rebuke from my own words.”

Perhaps all who seriously read Woolman’s Journal feel a similar rebuke arising from both their ability to recognize and their inability to act.  John Woolman was a completely good man; and this is our problem.  We can recognize and appreciate the goodness of his pure and simple life, his simple peace, his gentle, all-embracing love, but we are unable to go beyond recognition and appreciation of his goodness to the quiet practice of goodness in our own lives.  We intellectually profess obedience to the voice within; we profess functional simplicity; we profess all-embracing love.  But we cannot settle these things upon our own hearts.  We are victims of deep-rooted habit which, as Woolman recognized, “though wrong, are not easily altered.”  We are “too much clogged with the things of this life.”

Woolman’s love was all-embracing but it was also a practical love that changed people and institutions.  Like Emerson’s “practical thinker,” Woolman’s goodness “had some edge to it.”  Woolman worked to improve the condition of the Negroes, Indians, poor workingmen, sailors, English post boys or any group in society that was exploited and made to suffer for the benefit of another group.  Woolman refused to be an accomplice to the forces producing the conditions he recognized as evil.  He refused to pay a tax (we are perhaps reminded of Thoreau) to support wars against Indians and refused to accept official payment when he was forced to lodge and entertain military troops.  In England, he witnessed the miserable lives of English post boys and promptly directed his friends at home not to send letters to him on any common occasion by post.

Woolman is remembered historically as the prime force behind the early Quaker movement to abolish slavery. Active as a scrivener, he refused to draw up wills or documents that included slaves as items of property or exchange.  During his travels (in which he preached against slavery) it was occasionally necessary to accept food and lodging at the home of a slave-holding Friend.  Woolman felt uneasy under these circumstances and paid the Friend (generally against his host’s will) for his food and lodging; and he would often give the owner money to be distributed to the slaves, or distribute it himself.

But Woolman never ceased to embrace the evildoer in his love.  Trevelyan writes:  “And when the Friends found that they could not answer John’s questions, instead of poisoning him or locking him up as an anarchist, they let their slaves go free!”  He was unconcerned with the selfish salvation of his soul and professed in words and acts that “Conduct is more convincing than language.”  To Woolman, “the real substance of religion” is “where practice doth harmonize with principle.”

Like all genuine seekers of truth, Woolman’s life was outwardly simple.  Like Thoreau, he lived the simplicity he professed.  Woolman, seeing his retail clothing and supply business expand and prosper, gave it up, fearing it would soon control him.  He declared “Every degree of luxury hath some connection with evil,” and advised that if people “were content with a plain way of life, they had ever more peace and calmness of mind than they who, aspiring to greatness and outward shows, have grasped hard for an income to support themselves therein.”  To luxury, John preferred “the simplicity of the everlasting truth.”

Woolman led a simple life in obedience to the light within.  Sensitivity to the voice within, to absolute human values, demands simplicity.  The simple life of goodness often has very productive effects because nothing is ever over-complicated; nothing stifles the decision to act.