“No act of kindness, no matter how small, is ever wasted….” 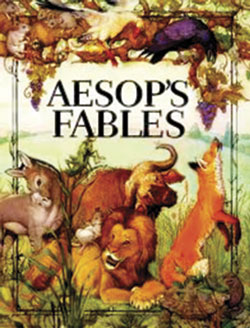 “No act of kindness, no matter how small, is ever wasted.”  So writes Aesop, a man who in all probability was a Greek slave, who lived approximately 620 to 560 B.C.

Although we know almost nothing about Aesop, his name comes down to us as a creator of “fables,” of marvelous little stories that generally use animals to make a moral point.  Two familiar ones are “The Tortoise and the Hare” and “The Boy Who Cried Wolf.”  There is a collection on-line of 656 fables attributed to Aesop—go to www.AesopFables.com--many of which are translations by Ambrose Bierce (who became part of Mexican history when he crossed the border in 1914 to find and interview Pancho Villa and who was never seen again.)

Just as Bierce enjoyed summarizing human frailties in a few words, Aesop enjoyed offering simple maxims by which to live.  From his tale, “The Lion and the Mouse,” comes “No act of kindness, no matter how small, is ever wasted.”

Some years ago, a minister friend named Allen Simons, in Fruita, Colorado, suggested in one of his sermons that the following week we think about those people who had been somehow important to us when we were young…particularly people we have not been in contact with for many years.  Then, should they still be alive, we were to write them a note of thanks for what they did for us in our lives.

I thought of Art Gorsuch, a wonderful man, then around 95 years old, who until age 90 actually sang as a solo “O Holy Night” each Christmas Eve at our church in Ashland, Ohio.  When I was a boy, Art had a garden on our property out behind our house… Art always went out of his way to talk to me and to my sisters as if we were actually human beings worth giving attention to.

I wrote Art a letter telling him how important he had been to me.  Although I did not hear from him, I felt good about sending him the letter.  A few months later my sister Nancy said Art mentioned he wanted to see me the next time I came home. When my beloved mother passed away, I flew back from Mexico and there at the funeral, helped down the aisle but still walking, was Art Gorsuch.  After saying some kind words to me about my mother, he looked up at me with his beautiful old face and said, “And thanks for writing to me.”

For many years, my family in Ohio had a close friend named Stan.  He was a sweet and gentle man, a physician who had served his fellow creatures for decades with dignity and love.  In his seventies he contracted lymphoma, a type of cancer generally slow-growing. But for all of us who loved Stan, it grew much too quickly, and far too soon Stan began to rapidly decline. My sister Nancy along with her husband Bob had been very close to Stan and his wife and his family.  During his last two years, Nancy searched almost weekly for cards…sometimes humorous, sometimes reflective or philosophical, and she would inscribe each card with a short and personal note.

Stan was finally moved to hospice care and to a little room set aside for the dying.  His last two weeks he had little need for “things” aside from a few toiletries, two or three beloved books, and a few pictures.  My sister visited Stan almost every day, sometimes only for a few minutes, sometimes for an hour or so.  The day before he passed on, he asked her to get a blanket for him out of the tiny closet.  She went to the closet, found the blanket, and just happened to glance up to the top shelf.  There was a shoebox, and inside was something precious he had brought with him for his last days on earth.  On the outside of the box, written in bold magic marker, were these words:  “CARDS FROM NANCY.”